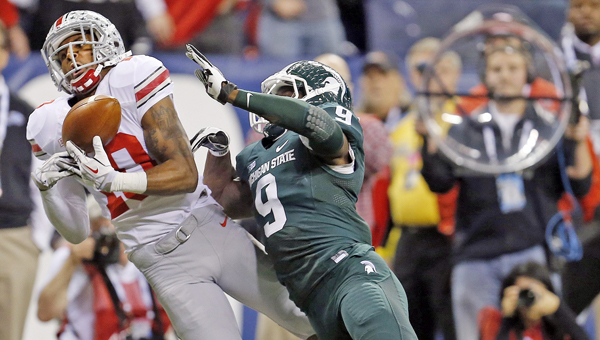 Ohio State wide receiver Philly Brown (10) can’t make the catch against Michigan State safety Isaiah Lewis (9) during the first half in the Big Ten Championship game at Lucas Oil Stadium in Indianapolis on Saturday. The Buckeyes lost 34-24 and will now play Clemson Jan. 3 in the Orange Bowl. (MCT Direct Photo)

MIAMI LAKES, Fla. (AP) — The Bowl Championship Series came calling once again for Ohio State, albeit not the game the Buckeyes wanted.

A day after seeing their national-title aspirations — and 24-game winning streak — end with a loss in the Big 10 championship game, the seventh-ranked Buckeyes were selected Sunday to play against No. 12 Clemson in the Orange Bowl on Jan. 3, a matchup of two teams who have put together nearly unmatched bodies of work over the last two seasons.

It’s the 10th BCS berth for the Buckeyes, more than any other school.

Since the start of 2012, both the Buckeyes (12-1) and Tigers (10-2) rank in the top 10 nationally in terms of points per game and winning percentage. Combined, they’re 45-5 since the start of last season, and although both had bigger aspirations, they still figure to give the Orange Bowl the type of marquee matchup that bowl games covet.

Still, going to the Orange Bowl may seem like a bit of a consolation prize for both schools.

Both entered the season among the presumed contenders for the national championship, which will be claimed by either Florida State or Auburn. Clemson had its chance against Florida State in Atlantic Coast Conference play — at home, no less — and got blown out, then fell again to South Carolina in the regular-season finale.

And if Ohio State had beaten Michigan State for the Big 10 title on Saturday night, the Buckeyes almost certainly would have gotten their chance to meet the Seminoles for the national title.

Instead, the Buckeyes are headed to Miami Gardens, Fla. — at the stadium where Ohio State coach Urban Meyer won his second, and most recent, national championship. Meyer led the Gators to the title after the 2006 and 2008 seasons.

“It’s going to haunt all of us I imagine for a little while,” Meyer said after losing the Big 10 title game. “But that’s part of the game.”

Ohio State finished seventh in the final BCS rankings. Clemson finished 12th. Both teams have big-time quarterbacks, with Braxton Miller for the Buckeyes and Tajh Boyd for the Tigers. Combined, Miller and Boyd have accounted for 70 touchdowns this season.

For Clemson, the Orange Bowl trip is a chance for some vindication. The Tigers were in the game two years ago after winning the ACC title, and were embarrassed 70-33 by West Virginia.

The Buckeyes will be vying to give Meyer his fourth 13-1 season since 2006. Clemson could finish 11-2 in consecutive years with a victory.

“They’re going to get a very good Buckeye football team that’s going to stick together and try to win a game,” Meyer said.

CINCINNATI (AP) — A disputed call went the Bengals’ way — not that they absolutely needed it. Getting Andy Dalton... read more