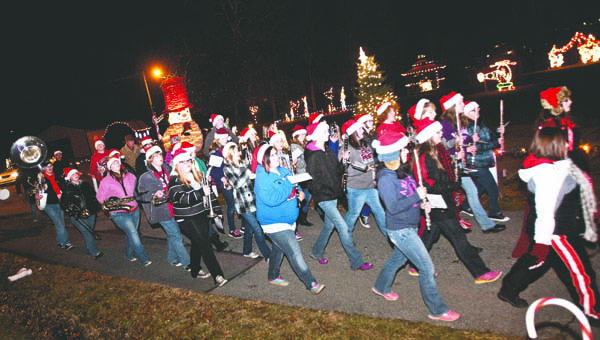 With temperatures dipping below freezing many residents chose to watch this year’s Coal Grove Christmas parade from the warmth of their vehicles.

“Lots of people just watched from their cars to stay warm,” said Sarah Chaney. “Then when the last part of the parade passes, they just pull off, so it’s convenient.”

The parade was originally scheduled for last Friday but the threat of icy rain and even colder temperatures forced the parade to be postponed. Tuesday’s weather was cold but potential snow showers held off making for a clear December night. Still, Coal Grove Mayor Larry McDaniel says the date change and the low temperatures hurt this year’s turn-out.

“Last year I think we had 30 groups participate,” McDaniel said. “This year we had 14 and it just seemed less people came out to watch but it was still a nice parade.”

The parade was short, but incorporated the quintessential elements needed for a holiday procession, such as fire trucks, a marching band, Santa Claus and people looking for fun.

“It’s a short parade,” Chaney said, “Which is fine. This is a small community that doesn’t need a big parade. This one suits Coal Grove just fine and it’s still a lot of fun for kids.”

The parade began at Dawson-Bryant High School ending at Paul Porter Park where refreshments were served to both participants and spectators.

Hiring a consultant to determine what would be needed as far as new jail won’t happen in the near future.... read more