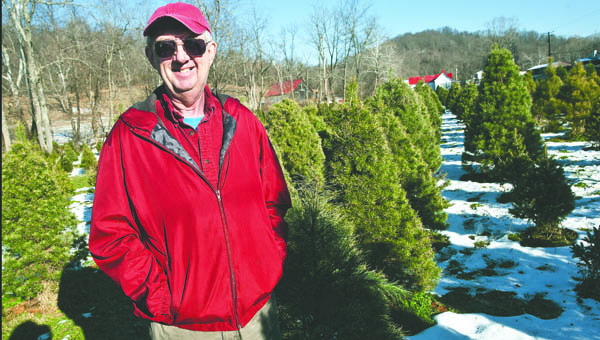 Tom Pinkerman, of Proctorville, is seen amongst his rows of Christmas trees at his business located off of State Route 775.

PROCTORVILLE — Starting a business is no easy task and keeping it going is even more difficult. Pinkerman’s tree farm in Proctorville was started in the 1960s and has gone dormant and re-opened several times since then.

Pinkerman’s tree farm offers all shapes and sizes of Frazier and Douglas firs, Colorado Blue and Norway spruces and scotch, white and red pines, which range anywhere from a 2 to 60 feet tall. The average size of Pinkerman’s trees is between 6 and 8 feet.

Pinkerman, 64, took over the farm in 1972 after his father got a job as a mail carrier. It remained open until the late 1980s when Pinkerman, who worked as a TV repairman, decided to focus full-time on his trade.

“For some reason in the late 1980s the TV repair business took off,” he said. “I just didn’t have time to keep it open and run the farm like it needed to be ran.”

The 40-acre farm on State Route 775 is home to 3,500 trees and was revived in 2004 when Pinkerman retired as a TV repairman. Winter weather has hampered business so far this year, Pinkerman said, but he also expects sales to continue creeping upward.

“Business has been so-so to this point,” he said, adding that he has sold around 50 trees so far. “Sales have slowed because of the bad weather we have been having. Last weekend should have been big, but it rained all weekend then turned cold and started snowing. Many people don’t like coming out in that mess to get a Christmas tree.”

He has seen a few, but not all his repeat customers and one day each week he can be found selling trees in the parking lot at the South Point Walmart. It’s a year-round job for Pinkerman, who said come spring he sells lots of blue spruces to people doing landscaping.

“One man bought four trees at one time,” he said. “One for a Christmas tree and three for landscaping.”

Family members assist Pinkerman at the lot, located at 1363 State Route 775 in Proctorville, which is open from 9 a.m. to dark seven days a week.

“We get some customers who come after dark,” he said. “They use flashlights or their car’s headlights to find a tree they like and cut it right there.”