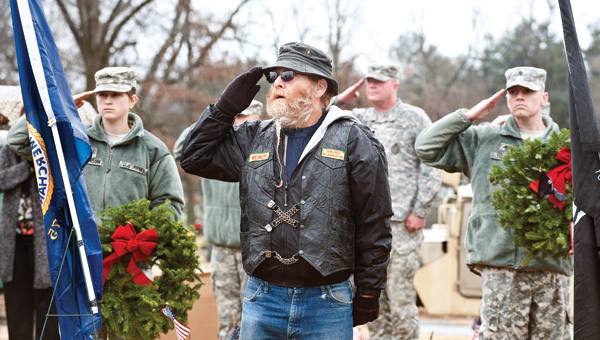 Jim Kelly stands at attention during the playing of the national anthem at the Wreaths Across America ceremony Saturday at Woodland Cemetery.

Each of the 950 veterans buried in Ironton’s Woodland Cemetery had a wreath placed on their grave Saturday.

The “Wreaths Across America” event was made possible by donations from the Lawrence County area, Kentucky, West Virginia, Virginia and various other places.

“This is an important occasion,” Lt. Col. Scott Evans, an Ironton attorney and member of the 216th Engineers Battalion, told those in attendance. “More than 20 million men and women have served, three million have been wounded and one million made the ultimate sacrifice. What we are doing today is very much a complement to what we do to honor our military on Memorial Day and Veterans Day.”

Woodland was one of 900 cemeteries across the country where an event was held to pay tribute to men and women who served in the military.

Patricia Tryon, of Ironton, was in attendance with her 13-year-old son, Tristan. Tryon has several military veteran family members buried in Woodland and her husband is currently on active duty in the U.S. Army.

“I come here every year,” she said. “Aside from the family members I have buried here I have many more who are also military veterans.”

The event garnered nationwide attention in 2005 when a snow-covered wreath on a grave at Arlington National Cemetery went viral. It became a national event in 2008 by an act of Congress.

“Hundreds of thousands of wreaths will be placed on graves at cemeteries and battlefields today,” Leon Dalton, one of the event’s organizers, said. “We are honoring those who fought to give us the freedom we have today.”

A tribute to the 92,000 American prisoners of war and those missing in action took place and a flag raising was conducted by members of the Portsmouth Division of the Army National Guard.

The wreaths will stay on the graves until the second Saturday in January.

Jim Walker jim.walker@irontontribune.com   They were nicknamed “The Fabulous Female Flyers,” and with good reason. Coached by B.J. Hannon, the... read more