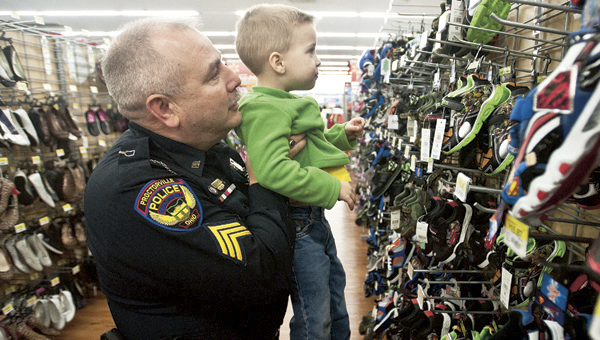 Officer Randy Thompson, with the Proctorville Police Department, gives little Acy Allen, 3, a lift to get a better look at a pair of shoes during the Shop with a Cop event at Wal-Mart Monday evening. Over 45 area children took part in the event.

Being a member of law enforcement can sometimes put officers in dangerous positions during the line of duty. Monday night was not one of those times.

Officers from every law enforcement agency in Lawrence County helped out at the third annual Shop with a Cop event.

“We had a great turnout,” said Sgt. Chris Smith from the Ohio State Highway Patrol. “It’s got bigger every year we’ve done this. The first year we only had 18 kids. This year we had 49.”

The event that allows underprivileged children throughout the county to pair up with a police officer and pick out Christmas gifts at the Walmart in South Point. The children are allowed to pick out toys and games, but only after necessities are taken care of.

“We try and make sure these kids get clothes, coats and the things they absolutely need,” said Lawrence County Sheriff Jeff Lawless “Then we’ll let them get some toys.”

Each child was allotted approximately $200 to spend. The funds for the event were provided through donations and fundraising efforts by the various departments.

“It’s a total community effort,” Smith said. “The departments sold raffle tickets, cutlery, apple butter. We also had some big donations from individuals and businesses in the area.”

Lawless and Smith both said the event not only allows young people the chance to have a better Christmas, it also gives them a chance to send a message to the community.

“It’s a great opportunity to dispel some myths about police officers,” Lawless said. “We get a chance to show kids, and sometimes their parents, that we really do care and we’re here to help.”

Smith echoed those statements and added that it’s also a learning experience for many of the officers as well.

“It gives them a chance to see how fortunate they are,” Smith said. “I bring my kids with me every year, and it reminds them that there are people out there in need. It also gives our different departments a chance to interact and work together.”

After the shopping was over, the children and their families went to Ponderosa in South Point for dinner with the officers. The dinner was also provided by the law enforcement agencies in Lawrence County.

Every year around Christmas Larry Muche goes to Florida. This year when he returns to Coal Grove, however, he will... read more