Ross scores 19 to lead No. 3 OSU by Delaware 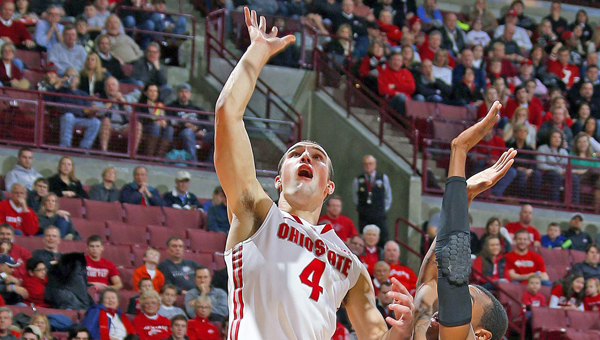 COLUMBUS (AP) — Everybody has days at work where things just seem to be out of sync.

It happened to No. 3 Ohio State on Wednesday night.

LaQuinton Ross scored 19 points, including eight in a decisive 15-0 run in the middle of the game, to lead the lethargic Buckeyes past Delaware 76-64.

“Sometimes you have games where it’s not clicking the way you want it to,” Ohio State coach Thad Matta said. “The difference between good teams and great teams is great teams can figure it out. We did momentarily at the end of the first half, but we couldn’t sustain it.”

The bottom line was the Buckeyes (11-0) won by double figures for the 11th time. They did it with balanced scoring — Lenzelle Smith Jr. added 14 points, Aaron Craft had 12, Amir Williams had 11 points and 12 rebounds and Amedeo Della Valle added 10 points — and by always keeping the Blue Hens at arm’s length.

“Our guys stood toe-to-toe for the most part with who I’m going to call the best team in the country,” Delaware coach Monte’ Ross said. “I’m just going to say that and I’m going to keep saying that because we played them. I hope they win every game the rest of the way.”

It was a surprisingly tepid shooting night for the Buckeyes, who had made at least 52 percent of their field goal attempts in each of the last five games to match the longest such streak since 1991-92. They ended up 24 of 59 (41 percent).

Up by 11 points at halftime and riding a 12-0 run, the Buckeyes added to their lead when Ross hit a 3 to open the second half.

The Blue Hens got as close as eight points twice. They were still hanging around at 50-40 when Ross flipped in a half-hook off an offensive rebound and Della Valle hit a 3-pointer from the left corner. Moments later, Della Valle swished another 3 from the right elbow to make it 60-44 with 10:28 remaining.

Delaware (5-6) cut it to 63-54 on Davon Usher’s layup with 6 minutes left before Williams hit a free throw, Smith made two free throws and Ross bumped his way into the lane for a basket to make it 68-54 with just over 3 minutes remaining.

Consecutive layups by Saddler cut the lead to 68-60 with 1:48 left, but Smith hit a jumper and two free throws to put the game out of reach.

Craft said if the Buckeyes weren’t ready to play, then that was the fault of the team’s only seniors — him and Smith.

“That’s on us as players, we have take ownership of that,” he said. “Lenzelle and I have to do a better job of getting these guys ready to go. Probably the best part is we found a way to win.”

The Buckeyes got 20 points from their bench, with Marc Loving, Sam Thompson and Trey McDonald all making solid contributions on top of Della Valle’s 10 points, two blocks, three rebounds and an assist.

“Those guys played great and came in with great energy when some of our starters didn’t,” Craft said. “Sometimes that’s what it takes.”

Devon Saddler, still rounding into shape after a seven-game disciplinary suspension, had 17 points and Jarvis Threatt added 14 for the Blue Hens, who have lost three straight. It was their second of three games in six days, all in the BlackRock Gotham Classic.

Both teams will be playing in the same final round of the “tournament” at Madison Square Garden on Saturday, with the Blue Hens meeting Bryant and Ohio State squaring off against Notre Dame.

Ross hit 8 of 13 shots from the field including both of his 3-point attempts.

The first half was a struggle for the Buckeyes.

Not until they went on a 12-0 run over the final 3:30 did they take command. Ross led the assault with a 3-pointer that lit the match on the run and later added a finger-roll layup in transition after a steal by Craft.

Craft added the last two points of the half after Delaware coach Monte’ Ross was whistled for a technical with 4.2 seconds left for a 37-26 lead.

The Blue Hens fell to 0-8 against Big Ten teams and 0-17 against Top 10 teams and 0-29 against ranked opponents. The only time the Blue Hens played a higher-ranked team was No. 2 Duke last season.

“I told our guys coming in, we couldn’t blink,” Delaware’s Ross said. “It was a terrific environment for college basketball that Ohio State, overstating the obvious, is used to playing in. But our guys didn’t shrink from the moment or the atmosphere.”