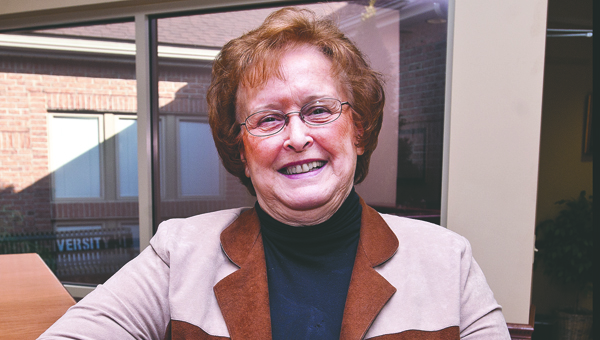 THE TRIBUNE/JESSICA ST JAMES
Shirley Dyer is now the new director of the Lawrence County Chamber of Commerce.

SOUTH POINT — The new director of the Lawrence Chamber of Commerce has spent most of her working life in the trenches of academia, whether on the campus of a local university or at the Statehouse in Charleston, W.Va.

Now Shirley Dyer wants to take that love for knowledge and spread the advantages of what the chamber can do for Lawrence County employers.

Dyer started this fall as the latest director of the chamber following in the footsteps of Jerry Rowe and Bob Smith. She comes to the chamber after almost 50 years with printing services at Marshall University, retiring in 2007 as the director.

There she oversaw the printing of brochures and college catalogues. From that she went on to work for Sen. Bob Plymale (D-Wayne, W.Va), who was on the state’s senate education committee.

“I love politics,” she said, “To see a bill introduced and watch it work through the process.”

However, throwing her hat in the ring is not in her plans.

“I am a behind-the-scenes person,” she said.

After about six years working with Plymale’s office, she went back to Marshall, but this time at the university’s community college that soon would become Mountwest Community College. There she took over the printing services and worked as a liaison between the college and Bulldog Creative Services that handled the school’s public relations and marketing.

As the New Year approaches Dyer has created for herself the task in 2014 of going out to businesses in the area to show them what the chamber can do for them.

“Some employers needing training can contact the chamber,” she said. “We can do networking and do training here that is less expensive.”

“She is just a tremendous business advocate,” he said. “A number of years ago she was in a key role at Marshall and I was well aware of her work with President Bob Hayes. She is committed to the success of small businesses in the Tri-State region.”

The county changing its insurance carrier and adding to its fleet of emergency vehicles were among the highlights of 2013... read more