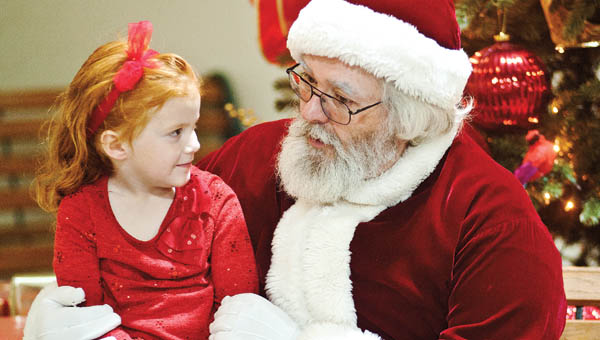 Nine-year-old Camille Turner, of Huntington, W.Va., makes her way down table after table of cookies selecting her top favorites at the annual Cookie Walk at the Tri-State Worship Center in South Point Saturday.

A healthy game of tag was going on Friday afternoon as youngsters raced through the lobby of the City Center awaiting the arrival of that favorite man in the magical red suit.

On the dot of 5 o’clock, a bell rang out on the second floor of the building, followed by a jolly “Ho Ho Ho.” Then, there Santa Claus appeared, jauntily scampering down the stairs for the fifth annual Cookies With Santa.

“Who wants to be the first to sit on Santa’s lap,” he shouted.

A rush of children in Santa suits and red velvet made a direct line to the jolly old man.

The first to get to tell Santa what she wanted was Olivia Williams of Ironton, although not before wondering for a second if this was the real deal.

“She said she wasn’t sure that was Santa because his beard wasn’t long enough,” Beth Williams, her mother, said.

Quickly she was reassured and posed prettily with Santa for a photo taken by Becky’s Photography, whose studio is in the Kyova Mall.

The annual event is put on by the City of Ironton’s finance department to give children a chance to visit with Santa in the city.

“This is just to include Santa Claus personally with little children,” Jonda Deeds, a finance department employee, said. “So every child can come to see Santa.”

After their visits, the children could stop by the buffet table for hot chocolate and homemade cookies, including iced gingers by Deeds’ mother,” Linda Burcham.

Organizers were curious about how this year’s turnout would be.