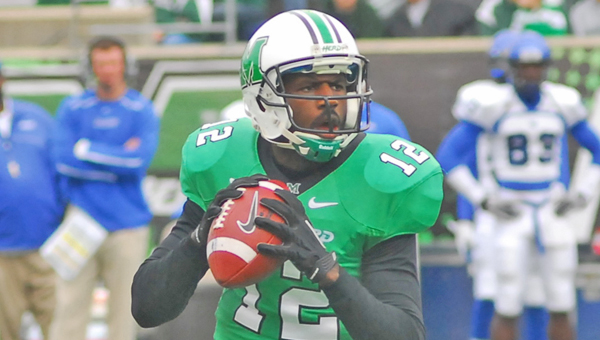 Marshall Thundering Herd quarterback Rakeem Cato will lead a high-scoring offense against Maryland in the Military Bowl that kickos off at 2:30 p.m. Friday. (Kent Sanborn of Southern Ohio Sports Photos)

When the Terrapins last played in the event, Ralph Friedgen walked off the field for the final time in 2010 as coach at his alma mater.

On Friday, Maryland’s first bowl appearance under Randy Edsall will be the football program’s last game as a member of the Atlantic Coast Conference. After facing Marshall in the sixth Military Bowl, the Terrapins will bid goodbye to ACC football and begin preparing to play next year in the Big Ten.

Maryland’s affiliation with the ACC began in 1953, when it joined as a charter member.

“It is bittersweet,” athletic director Kevin Anderson said Thursday. “I understand how much people love the University and being part of the ACC. I do embrace that. But as we move forward, going to the Big Ten is great for the institution and great for the athletic department.”

The Terrapins (7-5) understand the significance of the move from the ACC. They would love to go out in style, as they did in their final conference game, a 41-21 rout of North Carolina State on Nov. 30.

“We take pride in representing the ACC the right way,” quarterback C.J. Brown said. “We’ve been in this conference a long time. We ended our schedule on a high note, and we’re looking to build upon that in this game.”

Marshall (9-4) has other ideas. The Thundering Herd believes it can make a statement on behalf of Conference USA with a win over the Terrapins.

“We played an ACC school (Virginia Tech) and lost in triple-overtime. That kind of hurt,” Marshall right tackle Clint Van Horn said. “We like the challenge of playing up in competition. We have an opportunity to do that, and you can expect nothing less than the best from us.”

Five things to know about the Marshall-Maryland matchup:

HOMEFIELD ADVANTAGE: The game will be held at Navy-Marine Corps Memorial Stadium, which is 29 miles from Maryland’s home field. “It’s very important to be able to play in your state capital, to have your friends, your family the donors here to support the kids,” coach Terps Randy Edsall said. Advantage, Maryland? Not necessarily. The Thundering Herd has 10 players from the Washington area, and Marshall expects a huge crowd to come down from West Virginia.

EXPLOSIVE OFFENSE: Marshall is averaging 43 points and 545 yards per game, which should serve as a serious challenge for the Maryland defense. “They’re outstanding on offense. They can run the ball, throw the ball, spread you out,” Edsall said. Marshall quarterback Rakeem Cato has thrown for 3,579 yards and 36 touchdowns. His main target is Tommy Shuler, who has 97 catches for 1,097 yards. Maryland’s quarterback C.J. Brown said the Terps’ offense could be their best defense. “If our offense is on the field, that means their offense is off the field.”

VAST IMPROVEMENT: Maryland has already clinched its first winning season under Edsall and can double its win total from last year. Similarly, Marshall can double its win total from a year ago and reach double figures in wins for the first time since 2002. Although the Thundering Herd got beat by Rice in the Conference USA title game, the program is definitely making progress. “This is a great place,” coach Doc Holliday said of Marshall. “When I took the job, I knew I had the support to get this team back to playing for championships. We’re not there yet, but we’re getting closer.”

EYE ON THE PRIZE: The players from both teams have been ushered around the nation’s capital. Each received a video game system and treated to a hypnotist show. All of that was great, but that’s not why they’re here. “We understand that all this is just a bonus,” Marshall tackle Clint Van Horn said. “The task at hand is the game. We’re here to play football. We’ve done a good job of keeping that in mind.” Edsall said: “You make sure your work is pretty much done before you get here, then you allow your players to enjoy the festivities.”

NICE MEETING YOU: This is the first matchup between these teams on the football field. Marshall is 7-3 in bowl games, and Maryland is 11-11-2 — including a 51-20 rout of East Carolina in that 2010 Military Bowl.