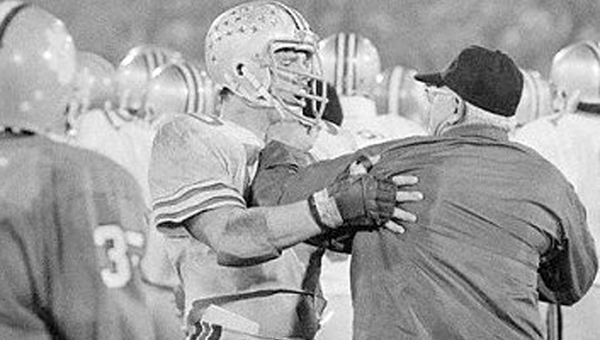 COLUMBUS (AP) — It has been 35 years and still the almost unthinkable image of an iconic 65-year-old coach cold-cocking an opposing player doesn’t fade away.

As Clemson and Ohio State prepare to meet in the Orange Bowl on Friday, a clip of that no-turning-back moment will undoubtedly be shown. The game marks the first meeting between the teams since Dec. 29, 1978 — when the 28-year, 205-win tenure of the hot-tempered yet beloved Buckeyes coach ended with one roundhouse right to the throat.

The end for one coach also marked the beginning for another.

Seventh-ranked Clemson (10-1), champion of the Atlantic Coast Conference, was coached by Danny Ford, who had been elevated from offensive line assistant to the top job 19 days earlier when Charlie Pell took the job at Florida.

The young assistant coach and the volatile Hayes — coaching his 276th Ohio State game — had crossed paths before.

“That particular year in the summer the South Carolina State (high school) Coaches Association had a meeting in downtown Columbia and they got (Hayes) to be the guest speaker,” Ford said recently. “He had standing room only, the biggest crowd they’d ever had of coaches. That was just about the first time the coaches came out with beards and mustaches — and he chewed out every one of them that had a beard or mustache.”

Ford chuckles at the memory.

It had already been a season of fits and starts for Ohio State, which opened with a 19-0 home loss to Penn State in which acclaimed freshman recruit Art Schlichter took over at quarterback for veteran Rod Gerald.

After the first five games, Ohio State was just 2-2-1 and there were whispers that Hayes — famous for his emotional outbursts even in the best of times — had lost his edge.

Then the Buckeyes rebounded with five wins in a row and went into the annual grudge match with archrival Michigan — the last battle of what is known in the two states as “The Ten-Year War” between Hayes and his former lieutenant, Bo Schembechler — with the Big Ten title on the line.

Behind senior quarterback Rick Leach the Wolverines won 14-3 to earn the Rose Bowl. The Buckeyes, who finished fourth in the conference, headed for Jacksonville, Fla., and the Gator Bowl.

At a banquet the day before the bowl, former Clemson coach Frank Howard sent good friend Hayes a pair of boxing gloves as a good-natured jibe about Hayes’ combative personality.

Thirty-six hours later, no one was laughing.

Ohio State pulled to 17-15 when Schlichter scored on a 2-yard run in the fourth quarter, but he was stopped on a tying conversion run.

With 4:22 left, Clemson fumbled at the Ohio State 24 and Buckeyes middle guard Tim Sawicki recovered. Schlichter guided the Buckeyes down the field to a third and 5 at the Tigers 24 with just over 2 minutes left.

Just a few yards more — or maybe none at all — and Ohio State’s Bob Atha could come on to kick a go-ahead field goal.

But Schlichter was flushed from the pocket and his pass over the middle for tailback Ron Springs was picked off by Clemson linebacker Charlie Bauman, who rumbled to the left sideline before being run out of bounds.

What happened next was almost incomprehensible. As Bauman got to his feet in front of the Ohio State bench, Hayes grabbed him by the collar and slugged him.

It happened so quickly, at the end of a game-deciding turnover, that ABC almost missed it as Keith Jackson cut to a commercial.

The world saw it — if not then, certainly in hundreds of replays over the ensuing days and the decades since. Bauman gets up. The old man in a scarlet jacket and the black cap with a scarlet O on it almost pulls him up so he can throw a straight right to his throat.

Ohio State’s players pulled Hayes away from a stunned Bauman while the teams traded shoves and empty punches for several more seconds.

When Hayes slugged Bauman there was only one word to describe the next few seconds, Snapp said: “Disbelief.”

As Hayes threw the punch, Hindman muttered, “No, Woody!”

It would be the only interception of Bauman’s college career.

Some say Hayes spoke briefly to the team in the locker room. Others say Hindman came in, asked the assistant coaches to leave, and then went into a private room to talk with Hayes behind closed doors for more than an hour.

The locker room was somber, with the players and coaches all but certain how this would end.

“Surreal,” Snapp said. Some staffers fought back tears. Players stumbled around as if in a trance.

Those closest to Hayes say he had stopped taking his diabetes medication, which left him irritable and unbalanced — and susceptible to a blow-up.

Hindman later met with Ohio State President Harold Enarson and they decided Hayes had to be fired. Hindman apprised Hayes in his hotel room the next morning and then made it public at a hastily called news conference.

As one of the team planes approached the Columbus airport a couple of hours later, Hayes got on the plane’s intercom and said simply, “I will not be your coach next year.”

Archie Griffin, the only two-time Heisman Trophy winner, had already graduated and didn’t find out about the punch until the following morning.

“I went over to (Hayes’) house (with former Buckeye) Daryl Sanders when they got back from the game,” said Griffin, now in charge of Ohio State’s alumni association. “I remember him letting us in and sitting in his living room. It was kind of quiet at first, but then he just was talking about a lot of other things. You knew it bothered him quite a bit.”

It bothered him so much he reached out to Bauman.

“Some things people don’t realize,” Ford said. “After that, (Hayes) called and got Charlie Bauman’s telephone number, it was on a Sunday. He called and asked me if he could speak with him. I said, ‘Certainly.’ He did visit with him.”

Hayes seldom spoke about the punch again. Neither did Bauman. He declined to discuss the punch and has spent most of his life trying to avoid talking about the crowning athletic achievement of his life.

Three years later, Clemson won its first and only national championship with Ford prowling the sidelines.

Hayes was followed by Earle Bruce, one of his former assistants, who the next year led a top-ranked squad — mostly recruited by Hayes — to within a one-point loss in the Rose Bowl of a national championship.

Hayes, whose record was 205-61-10 with the Buckeyes, remained a visible figurehead of the program he lifted to greatness. He was an associate professor at Ohio State for a while while remaining in touch with his many loyal former players and coaches. He died at the age of 74 on March 12, 1987.

Ford regrets that Clemson is linked to Hayes’ fall from the pinnacle.

“I hated that it happened against Clemson,” Ford said.

Griffin has an uneasy feeling that many only remember Hayes for the final intemperate, unconscionable act.

“I like to believe that the good things he did overshadow that,” Griffin said. “But, unfortunately, outside of Ohio people do remember that incident. One of the reasons that I always mention coach Hayes is because I always want people to know the good things that he did. The man was so much more than what happened.”