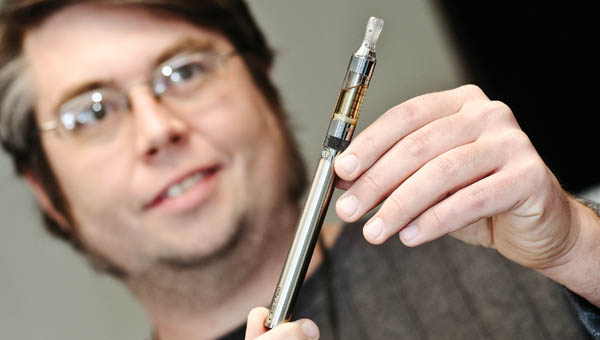 Joe Gehrling shows off his own vaporizer, an electronic cigarette, at his business Vapor Express in Coal Grove.

Nicotine patches, lozenges, hypnosis, prescription medication and even cinnamon are things smokers have utilized in attempts to kick the habit.

Joe Gehrling, of Ironton, quit smoking last August with the use of a personal vaporizer and he is now among the large and growing number of people who have switched from traditional cigarettes to the vapor alternative.

“I bought my first one and by the time I got to my vehicle in the parking lot I knew I needed to sell these,” he said. That’s exactly what he is doing.

He is the co-owner and manager of Vapor Express at 323 Marion Pike in Coal Grove which opened in late November and is currently offering free in-store samples to legal tobacco users to help educate them about the vapor trend.

“What makes vaporizers different than regular convenience store (electronic cigarettes) is they are completely customizable to the needs of each individual user,” Gehrling said. “The vapors are available in hundreds of different flavors and multiple strengths of nicotine. All the fluids in vapors are made in the United States.”

Gehrling and his wife, Maggie, operate Vapor Express with their business partner Brian Music, of Coal Grove, who all three not only sell the product, but also use it.

“I haven’t had a regular cigarette since I bought my vaporizer,” Maggie said. “I’ve been telling people about them everywhere I go. Now I can not only tell people about them, I can help them purchase the unit that is right for them.”

Both electronic cigarettes (e-cigs) and vaporizers are battery-powered devices used to simulate cigarette smoking. A heating element within the device turns a liquid solution of nicotine and flavors into a vapor. Some vapors are nicotine free.

The Centers for Disease Control and Prevention reports that cigarette smoking remains the leading preventable cause of disease, disability and death in the United States. Responsible for 443,000 deaths per year, for every one death there are 20 people living with a smoking-related disease.

E-cigs and personal vapors were patented in 1963 and the modern version was invented in China in 2003. Sales of vapor-related nicotine devices — either e-cig or personal vaporizers (PVs) — were $20 million in 2008. In 2012 sales reached $500 million and that number doubled in 2013 to $1 billion. Tobacco cigarette sales also increased slightly to $80 billion.

“It’s catching on,” Gehrling said. “Our business has grown steadily since we opened.”

The Federal Food and Drug Administration (FDA) has yet to determine the type and amount of chemicals received from e-cig and PVs, but it has been determined it is much less than the 7,000 chemicals generated from tobacco cigarettes.

3 hires added at Sanctuary of the Ohio Valley

Sanctuary of the Ohio Valley has increased its staff over the past few months. The Ironton long-term care facility hired... read more