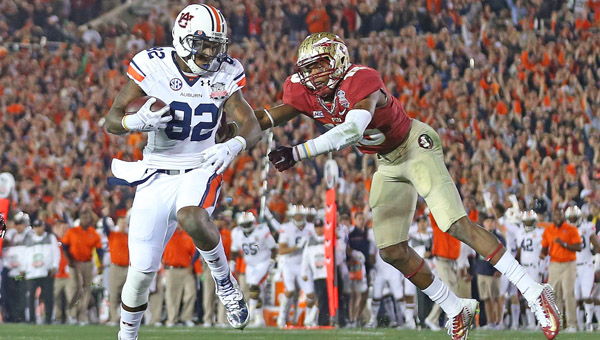 Auburn Tigers wide receiver Melvin Ray (82) avoids Florida State Seminoles defensive back Jalen Ramsey (13) to score on a touchdown pass from Auburn quarterback Nick Marshall (14) in the first half of the BCS Championship at the Rose Bowl in Pasadena, Calif., on Monday. Florida State scored with 13 seconds left to win 34-31. (MCT Direct Photos)

PASADENA, Calif. (AP) — Jameis Winston and Florida State faced down adversity for the first time this season, and showed they could take a punch if that’s what it took to win a national championship.

The Heisman Trophy winner threw a 2-yard touchdown pass to Kelvin Benjamin with 13 seconds left and No. 1 Florida State beat No. 2 Auburn 34-31 to win the BCS championship game on Monday night.

“There’s a lot of heart and guts down in Tallahassee, too,” coach Jimbo Fisher said.

The Bowl Championship Series went out with a bang, with one of the best championship games in its 16-year history. And the Southeastern Conference’s seven-year winning streak in college football’s biggest game was snapped.

Winston struggled much of the night but was near perfect when the Seminoles (14-0) needed it most, going 6 for 7 for 77 yards on the game-winning 80 yard drive. A pass interference penalty on Auburn’s Chris Davis gave Florida State a first-and-goal at the 2 and on the next play Winston hit his big receiver, Benjamin, for the touchdown in traffic.

There was no miracle finish this time for the turnaround Tigers. They tossed the ball around on one final play, but it ended with Florida State jumping on a fumble, and the Seminoles sprinting onto the field under a storm of garnet and gold confetti.

“I told them in the locker room, we put together the biggest turnaround in the history of college football. We were on the brink of making it one of those magical seasons,” Auburn coach Gus Malzahn said.

Winston was 20 for 35 for 237 yards and two fourth-quarter touchdown passes. Florida State hadn’t been challenged like this all season, winning by an average of 42 points.

The redshirt freshman, who turned 20 Monday, told his teammates: “I said ‘Guys, we didn’t come here for no reason.’ I said ‘Y’all, this is ours, man.”’

The Seminoles were down 21-3 in the first half, and wobbling, but never fell over.

And now Florida State is national champion for the first time since 1999, the first team to win it after being down at halftime.

Winston was jumpy against a strong Auburn pass rush, led by Dee Ford. He was sacked four times.

The Seminoles cut it to 21-10 with a late touchdown in the second quarter and chipped into Auburn’s lead with a 41-yard field goal by Roberto Aguayo with 6:05 left in the third.

Meanwhile, Florida State had found some answers to Auburn’s spread offense. A holding penalty that wiped out a long pass also helped keep the Tigers scoreless in the third quarter, and the Seminoles began the fourth with P.J. Williams intercepting Marshall’s pass and setting up Florida State at its 38.

When Winston tossed in the flats to Chad Abram, who hurdled over a tackler on the way to an 11-yard touchdown the lead was 21-19. Florida State was considering going for two to tie, but Devonta Freeman was flagged for unsportsmanlike conduct and that pushed the extra point back 15 yards and forced the Seminoles to kick and make it 21-20.

Auburn responded with its best drive since the second quarter, mixing runs by Mason and Marshall with one big pass to Ricardo Louis. But it stalled at the 6 and Cody Parkey added a 22-yard field goal to make it 24-20 with 4:42 left.

During Winston’s record-breaking season, filled with blowouts and fourth quarters spent watching from the sideline, he never faced a situation in which he had to drive his team to a winning score.

Now he had a chance to add that last line to his remarkable resume — until Whitfield handled it for him.

Whitfield broke through a seam around the 30 and hit the sideline at full speed. Fisher ran down the other sideline yelling “Go! Go!” with Winston chasing behind pumping his arms and slapping his coach on the back. Florida State was on top, but Auburn was not done.

Mason and Marshall went to work, driving Auburn into Florida State territory, and Auburn’s Heisman finalist, Mason, finished it off by bowling over Florida State safety Jalen Ramsey on the way to the end zone.

Auburn billed itself as a team of destiny, having gone from 3-9 to SEC champs under first-year coach Malzahn — with the help of some miraculous finishes.

But for much of the first half team destiny, the 10-point underdog, was dominating.

Marshall flipped into the flats for Mason, who followed a few wipe-out blocks and zipped into the end zone for a 12-yard score with 3:07 left in the first quarter. Florida State trailed for the first time since Sept. 28 against Boston College.

The hole got deeper.

With Florida State’s linebackers and safeties peeking into the backfield again, Auburn broke another receiver free down the middle. Marshall threw a strike this time to Melvin Ray, who went 50 yards for his first career touchdown and a 14-3 lead.

Meanwhile, for maybe the first time this season, Winston looked rattled. After completing three of his first four passes, he went 1 for 7, including a simple short throw that sailed high and missed its target by at least 10 yards. Fisher could be seen yelling to his coaches that they needed to calm down Winston.

Auburn’s defense certainly didn’t look as if it ranked 89th in the country in yards allowed per game. Ford was getting pressure on Winston, Chris Davis defended three passes and the Tigers’ D was playing like so many other SEC defenses that have controlled so many other BCS championship games during the conference’s reign over college football.

Ben Bradley and Angelo Blackson sandwiched Winston as he tried to tuck and run and the ball came loose. Auburn recovered at Florida State’s 27 and soon after Marshall swept in from 4 yards out for a 21-3 lead with 5:01 left in the first half.

Florida State finally came alive with the help of some trickery and some old-fashioned want-to from Winston. Facing fourth-and-4 in their own territory, the Seminoles faked the punt and ran a reverse to Karlos Williams that went for 7 yards.

Then Winston asserted himself in not the typical way for the most efficient passer in the country. On third-and-7, he broke free of the pocket, stiff-armed past one Auburn tackler and went for 21 yards to the 3. Freeman plunged into the end zone on the next play to make it 21-10 with 1:28 left in the half.

Fisher patted Winston on the helmet as the quarterback shook his head, as if to say, ‘I’m better now.’

COLUMBUS (AP) — Hang on. This could be a wild offseason at Ohio State. Even if, as expected, quarterback Braxton... read more