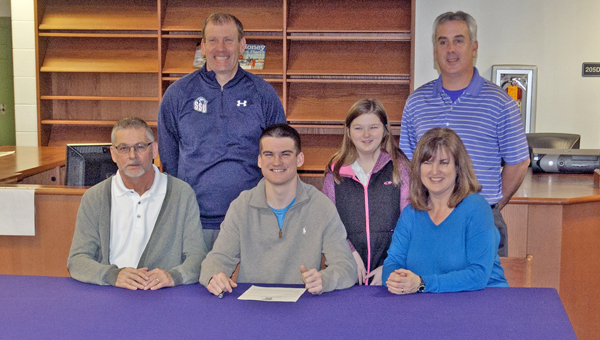 CHESAPEAKE — Drew Oxley took more time to size up a two-foot putt than he did making a decision where to play his college golf.

The Chesapeake Panthers’ senior golfer said it was a quick and easy decision when he decided to play at Shawnee State University.

“I visited Shawnee this past fall and as soon as I went there I kind of knew that’s where I wanted to be,” said Oxley.

“Their coaches said they would help me a lot through school and I talked to some of the teammates and they seemed really nice. It just seemed like the place I wanted to go to.”

A visit to North Florida and talks with other schools including a pair of Division II programs in the Columbus area didn’t sway his decision, so Oxley signed his letter-of-intent Thursday.

And while Oxley knew Shawnee was the place for him, the Golden Bears coaching staff knew Oxley was the golfer they wanted, too.

“I saw Drew play this past summer at a Tri-State event and I just liked him as a person number one, and number two was his golf game,” said Shawnee assistant coach David Hopkins.

“He comes from a good family, a good program here at Chesapeake. He’s played in the state tournament and they’ve won the league the last three or four years. He’s a solid individual and that is what we look for first, and then golf game second.”

Actually, Oxley was an All-Ohio Valley Conference golfer this past season as he helped the Panthers win a fifth straight title. He was part of the state qualifying team during his career and qualified for the state meet as an individual last fall.

Oxley will join several other local golfers including Josh Zornes of Ironton and Nick Saunders of Gallipolis.

“He’s a good fit for Shawnee State. He’ll have a chance to come in and play right away for us. He fits well with our other guys. He knows Josh Zornes and Nick Saunders. He’s a hard worker who’ll just get better for us and we look for big things out of him,” said Hopkins.

Oxley likes the direction the Bear’s program is moving including the signing of Southeastern’s Eli McKee.

“I think we’ll be pretty good. I saw Eli McKee play at the state and he’s pretty good. I’ve played with Josh (Zornes),” said Oxley. “It’s going to be different, but I’m excited. I’m going to play in a lot of summer tournaments and hopefully it’ll work out well.”

Oxley plans to major in business management and journalism.

Jim Walker jim.walker@irontontribune.com   It seems like every time the Ironton Fighting Tigers close a window, someone opens up a... read more