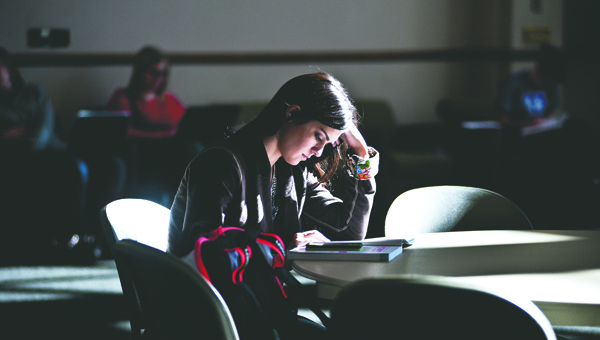 Refreshed upperclassmen and eager freshmen and sophomores alike convened at Ohio University Southern on Monday as classes for the spring 2014 semester began.

“We are excited to be back,” Ella Jones, associate dean, said. “It’s only fitting it feels like spring outside.”

Director of student services Robert Pleasant said this semester’s enrollment numbers are “on par” with the university’s usual numbers.

“Right now we have just more than 2,000 enrolled, but those numbers are very, very preliminary,” he said. “We are still in the process with gathering the numbers because we still have students coming in.”

Numbers at the end of the 2013 spring semester showed 2,200 students enrolled.

Sophomore human services/social work major and Pedro native Caitlin Smith is among the 2,000 students milling through the buildings at OUS. She said she’s excited about this semester because she will be taking more classes toward her major.

“I’m going to miss all the free time I had while on break, but I’m excited to get back,” she said. “I get to take a lot of classes this semester I’m really interested in.”

Smith doesn’t know exactly what she wants to do after graduating in a couple years, but she knows she wants to work with children either in schools or for child protective services. As far as OUS goes, Smith said it’s just a good fit.

“I really like it here because it’s big enough to be diverse but small enough that it’s not hard to get to know your classmates and professors,” she said. “I went to Marshall for a year and it was overwhelming — one class had 130 students — one-on-one help from professors at OUS is a great thing and something larger schools just don’t have.”

Prospective students have until Friday, Jan. 24 to enroll for the spring semester.

The county is expected to add three-quarters of a million dollars in tax revenue to its coffers following a sale... read more