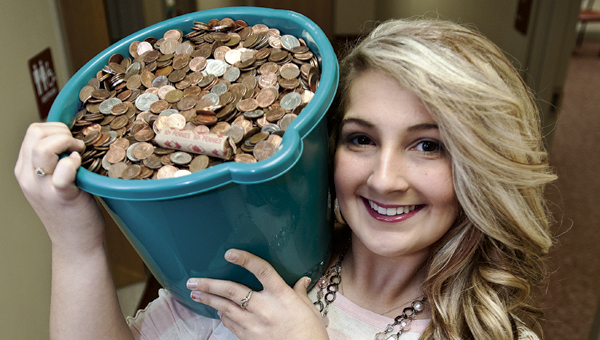 THE TRIBUNE/JESSICA ST JAMES
Rock Hill High School senior Courtney Joseph has been on a mission to raise funds for the Leukemia and Lymphoma Society through a penny drive at Rock Hill schools.

A penny saved might be a penny earned most of the time, but not at Rock Hill Schools. Students at the elementary, middle and high schools on Monday began collecting and donating pennies for a fundraiser.

The Leukemia and Lymphoma Society’s “Pennies for Patients” program has raised millions of dollars since 1994 to help pay expenses for families experiencing financial hardship because of treatment costs.

Rock Hill senior and National Honor Society member Courtney Joseph is spearheading the drive not only as her honor society project, but also as a good deed for a friend.

“I’m thankful to have people in my life like Courtney who make me smile,” Anita Scherer, Rock Hill High School nurse, said. “I’m very impressed with Courtney and I’m very excited about all this.”

Anita’s husband, Jim, died from acute myeloid leukemia five weeks ago and Joseph, who plans on being a pediatric nurse, said she just wants to help.

“Anita has always been there for me and helped me,” Joseph said. “I wanted to do something to help her.”

More than $700 was collected from the elementary school alone in the first two days and the middle and high school’s pennies will be collected today.

“It adds up fast,” Joseph said. “Some of the elementary school kids’ boxes were held together with duct tape.”

Most of the pennies are collected from boxes placed throughout the three schools. Sometimes, however, a coffee can full of change gets donated and even cash has been found amid the 1-cent coins. Elementary students have personal boxes and every classroom and office in all three buildings also has receptacles.

“It’s a really good project,” Kim Zornes, English teacher and honor society adviser, said. “I’m very proud of Courtney. She has organized and done this all on her own. She has an incredible attitude and it’s just something she wanted to do.”

Amy Swinson from the Tri-State Chapter of the Leukemia and Lymphoma Society in Cincinnati came to Rock Hill per Joseph’s request.

“I called her a couple months ago and asked her to come to school and talk about the program,” Joseph said. “She talked about different types of cancer and what it does to a person. It was really great.”

Donations are being accepted until Jan. 31. Contact the school at 740-532-7030 or visit the “Pennies for Patients” Facebook page for donation options and instructions. Per the program’s guidelines, if each school raises at least $400 it qualifies the class that collects the most money for a Domino’s-sponsored pizza party, which is a corporate partner of the Leukemia and Lymphoma Society.

When Gregory Campbell got his first book, “Cold Hands, Warm Hearts,” published it was a dream come true. Not just... read more