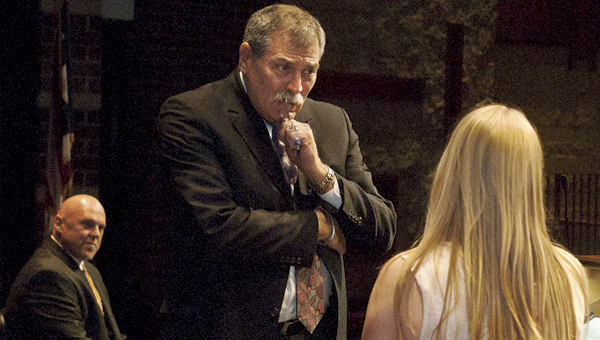 THE TRIBUNE/JESSICA ST JAMES
Dr. Richard Ross talks to seniors at Ironton High School about their futures during a special visit Wednesday.

It had all the fanfare and emotion of a pep rally before a big game. But the student body of Ironton High School was celebrating academics, not athletics.

“I would like to thank the efforts of the students and teachers for providing us with the reason we are here to celebrate this wonderful day,” Joe Rowe, Ironton High School principal, said. “I’m extremely proud of your efforts in the classroom and with the accountability testing.”

Ironton was one of 141 Schools of Promise in Ohio and on Thursday was presented a banner displaying the distinction to hang at the school.

“This assembly is about you and your accomplishments,” Dean Nance, Superintendent of Ironton Schools, told the audience. “It is very rare to get to meet a state superintendent and for one to come visit our little high school in our little town that we are all so proud of is quite an honor.”

Ross spoke about his time as a student and how his father dying during his senior year of high school threatened to derail his plans for higher education.

“A special teacher made a difference in my life,” Ross said. “She handed me an envelope with money in it and told me I was going to college and that set me on the path that got me where I am today.”

Ross spent time as a teacher, principal, college instructor and district superintendent before being appointed to his current position by Gov. John Kasich in March of last year.

Ross brought some students on stage and asked them about their goals and plans after high school.

“Who encouraged you?” he asked the students. “Sometimes it takes some encouraging for students to get to the next level. A student’s vision for the future doesn’t just happen, it has to be communicated throughout your schooling. This school has done that, it epitomizes that.”

The presence of Ironton Mayor Rich Blankenship was also something Ross said was important.

“Collaboration is key,” he said. “It is very important to see the mayor of Ironton here. By seeing him I know this school and city are in a good place. There are so many schools I go to in cities the size of Ironton and never see the mayor. I am glad he is here.”

Before embarking on a tour of classrooms with Nance and Blankenship, Ironton senior Ashton McMackin approached the podium.

“We are very proud of our community and school,” she said. “We graciously accept this banner.”