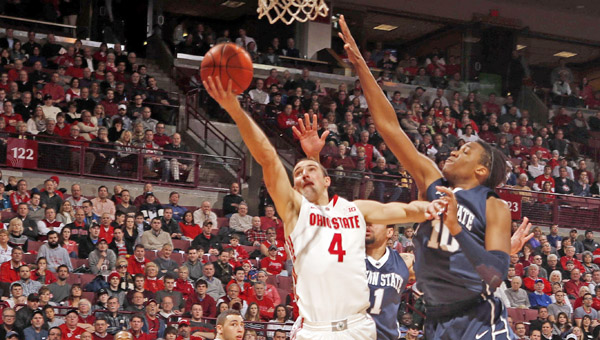 Ohio State’s Aaron Craft (4) puts a shot up against Penn State’s Brandon Taylor (10). Craft and the Buckeyes are trying to find answers to their inconsistent play. (MCT Direct Photos)

COLUMBUS (AP) — Thad Matta watches the video clips over and over. Somewhere in the midst of all those pixels he’s trying to find the answers to what’s wrong with his Ohio State Buckeyes.

The thing is, it’s hard to point to just one thing. The instant he thinks he’s solved a problem, something else pops up.

“It appears to be a little bit of a different scenario each time,” he said of the contributing factors when the Buckeyes go into a lull.

They’ve been doing that a lot lately. One month ago, Ohio State was unbeaten and ranked No. 3 in the nation.

The Buckeyes (17-5, 4-5 Big Ten) begin February having lost five of seven games and find themselves out of The Associated Press Top 25 for the first time in 80 polls, since January 2010.

Heading into Tuesday’s game at No. 17 Iowa, Matta and his staff are scrambling to patch some holes and get things turned around. The Buckeyes pulled off a big road win on Saturday, edging No. 14 Wisconsin 59-58.

“It’s a lot easier said than done, reeling a couple off,” Matta said.

The last two games, including an overtime loss to Penn State at home, have come down to a final shot.

The reasons for the Buckeyes’ failures — and what they did right in winning — are elusive.

“It can be a few different things,” point guard Aaron Craft said. “Sometimes we let one end of the floor tie into the other end. If we’re not getting stops on defense that might affect us a little on offense. And vice versa.”

Offensive mistakes have been a big problem. The Buckeyes were averaging just over 10 turnovers a game; they’ve averaged more than 13 a game in the last seven games.

“We don’t have that zip that we have on the offensive end that we usually do when we’re playing well,” said forward Sam Thompson.

“We’re turning the ball over. That’s probably the most common theme of our struggles.”

The Buckeyes have also had trouble shooting.

They were making 47.4 percent of their shots from the field before their swoon and are at 40.5 percent since.

Matta saw signs at Wisconsin — as tough a place to play as there in the Big Ten (at least until the Badgers dropped their last three at home) — which were encouraging.

“I like the fact that Saturday we were down eight in the first half, and seven or eight in the second half and still found ways to come back and win the game,” he said. “We made plays that we needed to make down the stretch to win the game, both offensively and defensively. And we hadn’t done that through this stretch.”

The Buckeyes live and die off their defense. Yet, at times, they’ve given up points in chunks, particularly close to the basket.

“When we’re not playing well on the defensive end, we’re not playing as one unit,” said Thompson, inserted into the starting lineup on Saturday for Shannon Scott for the first time this season. “We have five guys guarding their own man as opposed to moving as one.”

When they hosted Iowa on Jan. 12 — an 84-74 loss that pretty much set them on this downward spiral — the Buckeyes allowed 44 points in the paint.

“They’re going to score in the paint — that’s kind of their M.O. this year,” Craft said. “We need to find ways that we can hopefully minimize that as much as possible.”

All in all, the Buckeyes have been a fragile team, profoundly affected by bad calls, foul trouble, missed shots and when an opposing player makes a great play.

These days, nothing is taken for granted.

It was pointed out to Matta that one of his players had a dunk late in the Wisconsin game that might have padded the lead.

“That’s not even a sure two (points) anymore,” he said.

He was kidding. But maybe not.