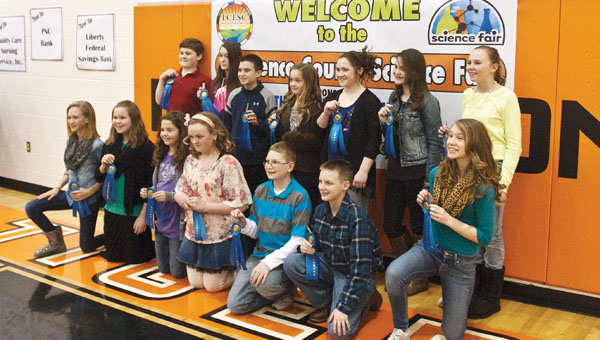 More than 100 scientific studies conducted by students were presented to a panel of judges, ranging from the cleanliness of ice to how basketballs bounce.

“I had fun working on my project,” Lilly said. “I learned a lot, and I’m happy with how it turned out.”

Lilly formed a hypothesis that dogs, like humans, have a dominant side of their body. She says she tested about 25 dogs to come to her conclusion, and was awarded a superior ribbon for her effort.

During the award ceremony ribbons were handed out for excellent projects, superior projects, and trophies were given out to those who finished with one of the five best projects.

Gavin Meadows, a seventh-grader from Rock Hill, took home the award for best overall project. Gavin conducted a study to determine weather ice at restaurants was cleaner than bagged ice bought at stores or gas stations.

“I discovered that restaurant ice contained more bacteria,” Gavin said. “I tested five restaurants and on average it wasn’t as clean as store-bought ice.”

Gavin, who jumped off the bleachers in excitement when he was announced the winner, says that he was shocked to take home first place.

“I was completely surprised,” Gavin said. “My fist were clinched, my heart was racing and when I heard my name the adrenalin skyrocketed.”

This was the second year Gavin competed in the science fair, after being awarded an excellent ribbon in last year’s competition.

“I did it last year and just got an excellent,” Gavin said. “The tide turned this year and I made a big jump to be named the winner. I couldn’t have done it without my mom though; she helped me a lot. I’m just excited right now.”

The science fair was originally scheduled to be held at Rock Hill Middle School, but was moved to IMS due to weather.

When Tami Goody took over as county commission administrator seven years ago, the county’s workers’ compensation premium was close to... read more