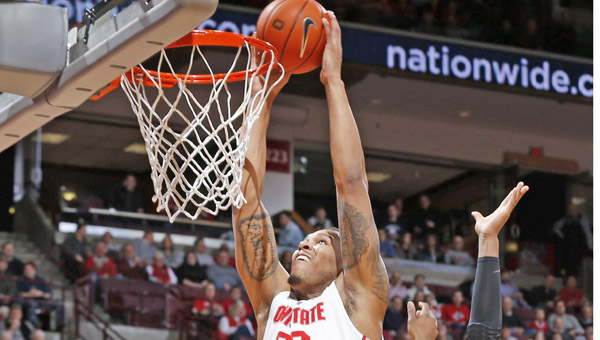 COLUMBUS (AP) — The temperature outside Ohio State’s Schottenstein Center was in the teens and the wind chill near zero. And the students kept coming over on Monday.

They set up tents on the cold concrete, waiting for prime seats for Tuesday night’s game against rival Michigan.

Fans at the encampment, dubbed Mattaritaville after coach Thad Matta, know this is a big game. So do the Buckeyes.

“The fans get a little more excited about it,” senior point guard Aaron Craft said. “It’s always great to feed off your own fans’ energy. There’s people out there camping outside right now in this weather. That makes you want to play a little harder.”

There were seven large, multi-person tents set up on the south side of the arena 30 hours before the game tips off. Despite the bone-chilling cold, a steady stream of students carried in tents, sleeping bags and blankets from a nearby parking lot.

When the rivals meet, it’s always a red-letter day for fans. For this particular meeting, there’s ton riding on the outcome, too.

Ohio State (19-5, 6-5 Big Ten) has won three in a row to climb back to No. 22 in this week’s Associated Press poll after plummeting out of the rankings in the wake of a 1-5 spell in January.

“This is a big one for us,” post player Amir Williams said. “We just have to be ready to play. We can’t come out lackadaisical, come out like it’s just some other game. It’s a priority to build our standing in the Big Ten and help our place in the Big Ten tournament.”

Michigan (17-6, 9-2) shares the top spot in the conference with Michigan State, but is coming off an 85-67 loss at Iowa on Saturday. The matchup with Ohio State is the Wolverines’ third Big Ten road game in 10 days.

Hitting the road just three days after a bad loss at another ranked opponent makes it easier to move on. But it also doesn’t allow for a breather.

Echoing Beilein, Matta said it’s difficult to put much emphasis on even a rival when the games are coming at you rapid-fire.

“We play so many times,” he said, explaining that almost every game carries equal weight. “Obviously, for the fans on both sides, it’s a big, big game. Just in terms of where we are in early February, it’s, jeez, another Big Ten challenge for us.”

In the Big Ten’s 12-team, 18-game rotating schedule, this will be the 173rd meeting overall — but the only one during this regular season.

“You tend to get everyone’s best game,” Craft said. “But there’s always something special about playing against Michigan. Whatever it is, bragging rights, whatever — it’s always great to play against them. The energy in the gym is always a little higher.”

The Wolverines have not won in Columbus in more than 11 years.

Each team has seven games remaining, four at home and three on the road. Each wants to make a big move. Neither can afford many more slips.

“We know in this league, (the teams in spots) one through 12 can beat you on any day,” Beilein said. “We have to try to win as many as we can and just see what happens because it’s a son-of-a-gun to win any game.”

Matta said there is no need to dwell on what the Buckeyes risk. It’s also not possible to get up for particular opponents in a conference where upsets seem to come as frequently as snowfall.

“(The players) would tell you that our whole concern moving forward is about us and really trying to simplify what we’re doing and get this group of guys to play their best basketball,” he said. “It’s not because it’s this opponent or because the standings say this. It’s because that’s what we need to do in this league to have a chance to win.”