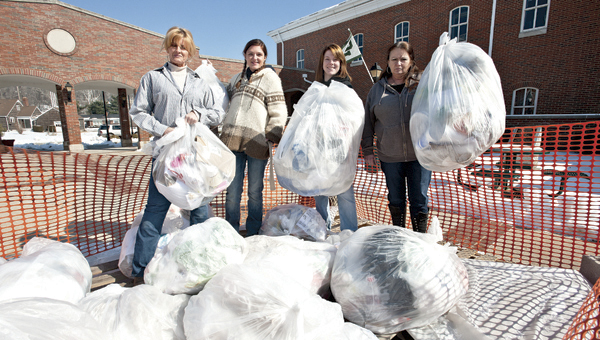 History shows competition among colleges can be heated even when deemed “friendly.” An event currently under way at 461 colleges and universities from all 50 states and Canada is definitely friendly, especially to the environment.

The 14th annual RecycleMania is an eight-week event used as a tool for colleges and universities to promote waste reduction activities to students, faculty and staff.

“(OUS) has been participating in the event for the last six years,” Adam Riehl, OUS director of facilities management, said. “Our numbers have improved every year except one. The main goal is to have a greater percentage of recycling material than waste material.”

All OUS buildings participate in the event including its Proctorville center, the Ohio Horse Park and the child development center in Hanging Rock. In 2013, Riehl said, 48 percent of the OUS waste stream was recycled.

Institutions participate on two levels, benchmark or competitive, the former allows schools in the first or second year of participation to do so on a lower level.

“We use the event to remind our campus community how, where and what to recycle,” Riehl said. “It serves as an overview for new students, staff and faculty and a refresher for the ones who have been through it before. Based on the percentage of recycling material to waste material OUS was No. 3 in Ohio last year.”

To further raise awareness for recycling several student workers have been recruited to be in the forefront of marketing and promoting the event.

“We are doing whatever we can to generate interest,” Sarah Simmons, junior specialized studies in cultural diversity major, said. “Lately we have been going around campus and taking photos of people recycling. It’s called getting caught ‘green-handed.’”

Three other members of the OUS Eco-Club as well as 20 students from the art collaborative join Simmons, who was part of the event last year.

Beginning this past Monday a “Mount Trashmore” was placed in the main campus’ courtyard to hold all trash collected by the custodial staff so those on campus can get a firsthand view of just how much waste can be produced in a week.

“The Mount Trashmore is being used so the campus community can make a connection between waste and recycling,” Riehl said. “It will only be there this week and the amount of waste created by a campus this size is more than the students, faculty and staff probably realize.”

RecycleMania began in 2001 as a competition between Ohio University and Miami University. By the year 2011 more than 630 colleges from 49 states and four Canadian provinces competed. More than seven million students have recycled 91 million pounds of recyclables and organic materials, which is the equivalent of the greenhouse gas emissions of 25,000 passenger cars, the electricity usage of 15,500 homes and the carbon sequestered by 99,353 acres of U.S forests in one year. This year 20 Ohio colleges and universities are competing.

“RecycleMania is exciting because it builds on traditional college rivalries by adding recycling to the list of things that schools can brag about when it comes to their archrivals,” Stacy Wheeler, president of RecycleMania Inc., said. “The competition aspect of the event makes it fun and helps to encourage everyone on campus to make recycling part of their daily routines.”

The competition lasts until March 29 and is made possible by the Alcoa Foundation, the American Forest & Paper Association, the Coca-Cola Company and SCA Tissue.

This winter has been one of the coldest and snowiest in recent years for the Tri-State. According to the National... read more