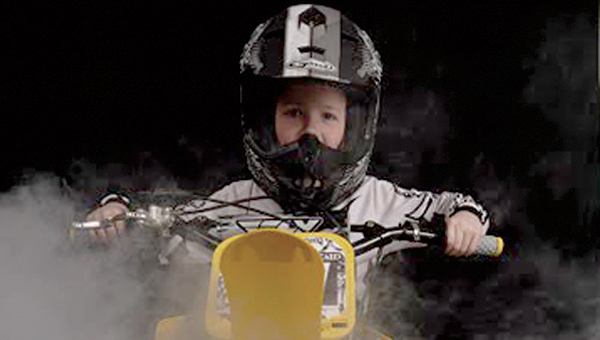 Christian Kincaid revs up his bike as plumes of smoke surrounds him. Photo courtesy of Hedgecock’s photography.

From the moment he was old enough to hold on, Christian Kincaid has been riding dirt bikes and ATVs with his father.

Now, the 8-year-old native of South Point has a once in a lifetime opportunity. Christian was recently selected from a field of more than 250 riders to participate in a KTM Junior Supercross Challenge this Saturday in Indianapolis, Ind.

“It’s a huge event,” Christian’s father, Bernard Kincaid, said. “Christian was the only rider from the Tri-State chosen, and to my knowledge is the only Tri-State participant ever selected.”

The race will be during the Monster Energy American Motorcyclist Association Supercross World Championship held in front of 67,000 people at Lucas Oil Stadium. In preparation for the event Christian and his father have upped their practice schedule.

“We usually practice four to six hours a week for a competition,” Bernard said. “This one is by far his biggest event though, so we’ve practiced more. Just trying to get him as much time on the bike as possible.”

Christian was selected for the event based on a riding resume he built during the summer and fall competition seasons. Success didn’t come without a setback.

“I was in gym class, trying to do a jump on a Razor Scooter,” Christian recalled. “I fell and shattered my elbow.”

The injury kept Christian off his bike for more than a year. When he returned to riding competitively, he was a little behind some of the other riders.

“He was racing pretty well but hadn’t finished any higher than fifth place,” Bernard said. “He told me he wanted to go to the big Loretta Lynn competition. I told him if he could get a win in his next five races we’d go to Loretta Lynn.”

Christian did just that, ending his summer season with three first-place finishes. Christian used the momentum from the summer to propel him in the Tri-State fall seven-race points battle where he finished second overall, 13 points behind the leader.

“When he won that first race I was so excited I ran out and tackled him,” Bernard said. “He has really came a long way since getting back on the bike.”

Christian says he is excited for his opportunity to race on such a big stage, but that he’s most excited for a chance to meet the Monster Energy girls.

“I’m really excited,” Christian said with a smile. “I want to get a kiss from one of the Monster girls.”

For Saturday’s race Christian will compete in the 50cc class in the 6 to 8 year old age division. He’ll also receive substantial support from the stands.

“The racing fanbase is the most supportive sport in the area,” said Christian’s stepmother, Heather Kincaid. “So many of the families of kids he has raced against said they are going to go and watch. He has teachers from South Point Elementary and his principal who are going to be there.”

Gateway Cycles, Interstate Batteries, and Lavallette Cycles sponsor Christian, the latter supplied him with a $300 neck brace for the event.

Harvest for the Hungry fundraiser is Saturday

Harvest for the Hungry Food Pantry Director Diane Porter said a sharp increase in the number of people served in... read more