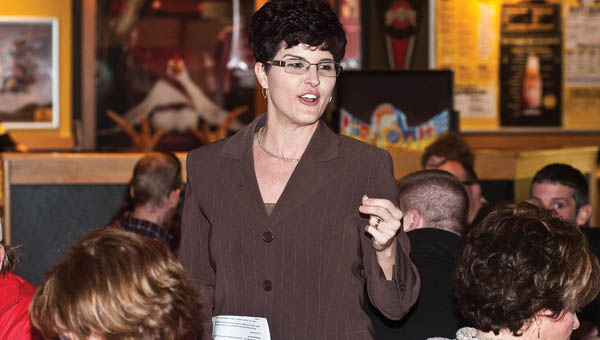 Carol Allen grabbed a black Sharpie and began fervently writing on an easel pad. She jotted down suggestions she feels would enhance Ironton.

Allen’s ideas for wayfarer and historical signage were just two of hundreds discussed at a Death to Negative Attitudes (DNA) meeting hosted by Ironton aLive at Buffalo Wild Wings this past Thursday.

“We have to thank Billy Bruce for his column that generated so much buzz,” Katrina Keith, chair of Ironton aLive said. “We are so fortunate to have people here who really love their community and want to move it forward.”

The theme of the meeting couldn’t have been more apparent if it were displayed on one of restaurant’s large projection screens: Positivity.

“Positivity breeds positivity, I truly believe that and you all showing up is a huge accomplishment,” Jon Ferguson, executive director of Ironton aLive, said to the nearly 60 people in attendance. “We need to stay realistic with the goals we want to achieve. I’ve heard people say we need a Walmart in Ironton. OK, ask yourself what you can do to help get it here.”

“We have to invest in our community, and to do that, we need everyone,” Keith said. “We can’t expect other people to invest here if we aren’t willing to do it ourselves. We are proud people. We are people of Appalachia and because of that we know how to survive.”

In the spirit of positivity, Ferguson bragged about the benefits of social media, but he also warned of its dangers.

Ferguson said he also took more traditional media to task in the past and previously challenged The Tribune to write two positive stories for every one negative story.

“The paper is getting better about everything not being negative,” he said. “When businesses or individuals are considering coming to Ironton one of the first things they look at is the local paper and use it to gauge the attitude of the community.”

Each person was then asked to write suggestions on notecards detailing what they would like to see — and in some cases no longer see — happening in Ironton.

“I want you to be open and honest,” Keith said. “If barriers exist they have to come down. Please share any of your concerns and ideas.”

The notecards were collected, will be reviewed, categorized and discussed at a future meeting. Enhancing local businesses, promoting the city and its events and Ironton’s design were the three main topics.

“We definitely want to work to help the local businesses in the city,” Ferguson said. “We have great events in the city already and we need to build on those and the design is just really thinking about how we want to be viewed.”

Ferguson lauded the work of existing groups who currently work toward these goals such as Ironton In Bloom and Friends of Ironton.

The number of people who showed up was “awesome,” Ferguson said, and he expects to see just as many, if not more, at the next DNA meeting, which has not been scheduled. A mass email of the notecard suggestions will be disseminated after they are reviewed and categorized.