Puttin’ on the Ritz 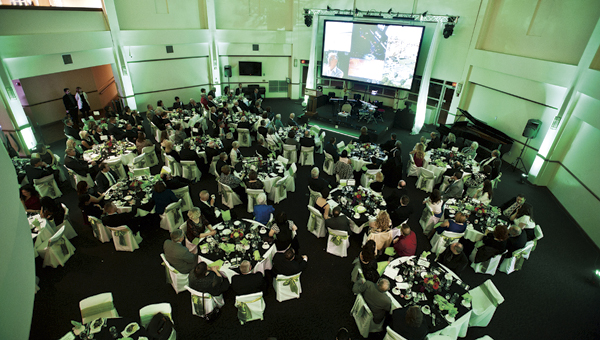 The Riffe Center Mains Rotunda at Ohio University Southern was a dimly lit shade of green and sound of jazz from the Bob Thompson Trio floated through the air.

Ladies in dresses and gentlemen in suits sipped cocktails and nibbled on hors d’oeuvres; caterers rushed from table to table. On the second level, however, were a few men in T-shirts wearing headsets frantically adjusting lights, speakers, microphones and cameras.

As members of the OUS Electronic Media Program, they were there to work.

It’s only fitting a group of students, employees and (occasionally) faculty of the electronic media program would be working so diligently on a Saturday night while most ate, drank and socialized.

That work ethic is the reason the 2nd annual Dean’s Gala at OUS lauded 20 years of the electronic media program.

“This is a great event. I think it’s very evident through the product of so many stories of former students, the electronic media program helps students get the hands-on training and skills they need to hit the ground running in the field,” Dave Roberts, a Lawrence County native, graduate of the program and morning show host at WKEE 100 FM in Huntington, W.Va., said. “And it’s quite the celebration of the 20th anniversary, with delicious food, great entertainment, and, of course, catching up with former instructors and classmates making the evening an absolute honor to be a part of. (Roberts and his wife, Tracy) absolutely love it.”

“It’s a wonderful evening,” Moore said. “I really appreciate the support from the community, staff, faculty and alumni.”

After Moore introduced the event’s emcee Dr. Jeff Demas, a video was shown featuring former students and highlighting their accomplishments.

“For me (the video) was a heartfelt moment,” Moore said. “Seeing former students and hearing about their accomplishments in life is a special way to celebrate our 20th anniversary. (OUS Director of Development) Matt Ward and his staff did a wonderful job with this year’s event.”

Moore recognized the event’s special guests before featured speaker Keith Matheny, a mentalist and motivational speaker, engaged the audience with humor and words of inspiration.

A silent auction was underway from 6 p.m. until the start of the program and the winners were announced before the conclusion of the gala. Items auctioned ranged from vacation and golf packages, sports memorabilia and tickets, spa packages as well as some unique items.

The meaning of the gala didn’t get lost among the glitz and glamour, however, and Moore feels as if people who may not have had much knowledge about the electronic media program will have a better sense of it now.

“Truly our mantra in electronic media ‘You can get there from here,’ was realized here tonight,” he said.