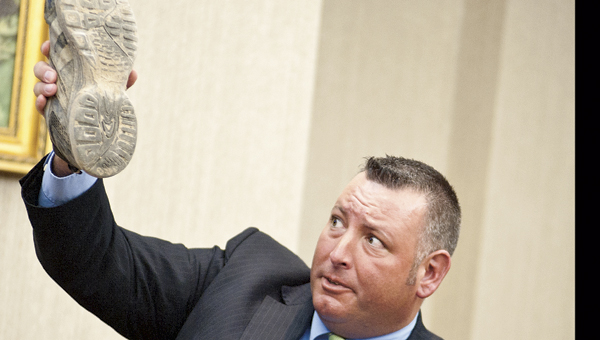 It has been more than a year since evidence was collected and analyzed in connection with an alleged murder in Ironton, but on the third day of the trial, the defense attorney is asking that a piece of evidence be completely tested by the Bureau of Criminal Investigation.

Mike Davenport, attorney representing Rodney “Rocky” Delawder,” who is charged in the shooting death of his brother-in-law, John A. McKnight, asked that a shotgun shell found in the alleged murder weapon be tested for DNA evidence.

The request was prompted by testimony from Sarah Smith, a forensic scientist in the DNA section of BCI, who said the casing was swabbed for DNA, but not processed for a match.

Smith testified she tested other parts of the shotgun, which was collected from the crime scene at the McKnight residence on State Route 243 in Ironton on Jan. 29, 2013. The swabbed sections included the shotgun trigger, stock and hammer and barrel latch.

Smith said a DNA match was made between Delawder and the gun sections. She also said another partial DNA profile was found, but it was too inconclusive to determine whom it belonged to.

Davenport asked Smith why DNA was tested from the shotgun casing.

She explained the surface of the casing was so small it would be unlikely to yield enough DNA to match.

Judge Charles Cooper held his ruling on the request for new testing based on Smith’s statement that the evidence was not at her lab at this time.

Once the exact whereabouts of the evidence is located, it is expected Cooper will rule on whether to allow the additional testing.

If the evidence is tested, the results would have to be returned before the case is turned over to the jury, which is expected to be Friday.

Hanshaw walked the jury through various photos of the exterior and interior of the McKnight residence and a diagram, which depicted the trajectory of the shotgun blast that killed John McKnight.

Today will begin the fourth day of testimony, but the first for the defense to call witnesses.

In addition to murder, Delawder is charged with second-degree felonious assault against his other brother-in-law, Larry J. McKnight, 46, and second-degree improperly discharging a firearm into a habitation.

ORVJC could be potential site

If the “ifs” can be overcome, Lawrence County may have found an answer to housing inmates somewhere other than its... read more