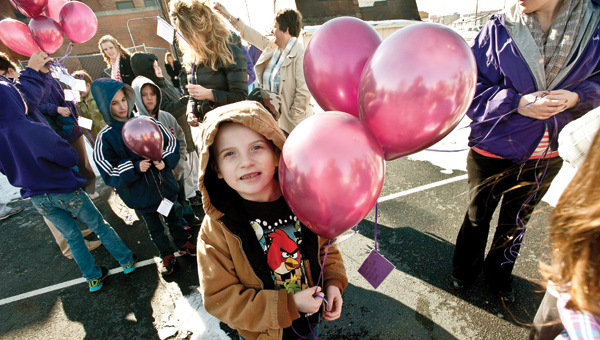 The 60-plus students at Open Door School in Ironton gathered on its playground Thursday morning, each with a purple balloon in hand. Attached to each balloon’s string was a card bearing the student’s name and address. The student body collectively counted down from 10 and on one, released the balloons into the blue, crisp air.

“We’ve been doing (the balloon launch) for as long as I can remember,” Tim Nunnery, Lawrence County Board of Developmental Disabilities Public Relations and Personnel Director, said. “The balloon launch symbolizes the beginning of DD Awareness Month and all our events are underway and we really hope the community gets involved.”

The cards containing students’ names and addresses also encourage the person who finds the balloon to write that student a letter.

“We’ve had people write letters from as far away as Pennsylvania and Virginia,” Nunnery said. “We’ve gotten plenty from people in the mountains of West Virginia.”

Other events include a Chili Fest and Craft Show, a 5K run/walk, which was Saturday, March Madness basketball games, a food drive and eyeglasses collection.

The Chili Fest and Craft show is scheduled for 11 a.m.-2 p.m. Saturday, March 22. Registration for chili entries and booth rentals for crafters is now open.

The food drive and eyeglasses collection will take place at various locations throughout March and April.

A $10 cookbook will be sold at most of these events to raise money for prom, graduation and Christmas shopping by the Open Door School Boosters Club.

For more information about DD Awareness Month, to purchase a cookbook, or register for the Chili Fest and Craft Show, call 740-532-7401.

There were no shocking upsets, no monumental comebacks or any last second heroics. The Fairland High School quiz bowl team... read more