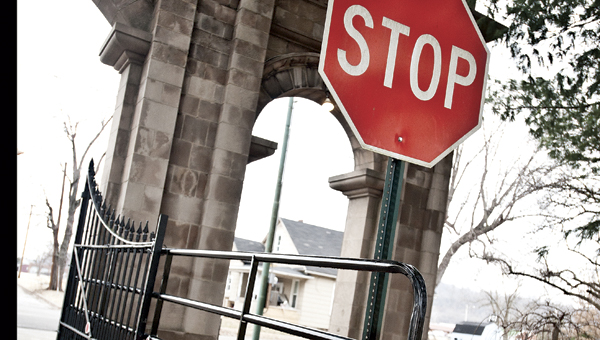 THE TRIBUNE/JESSICA ST JAMES
A makeshift gate is attached to the original entrance leading to Woodland Cemetery.

Those who have visited Woodland Cemetery in the past few weeks may have noticed something a bit off about the large iron gates that secure the grounds.

There is a black cattle fence attached to one half of the more than 100-year-old iron swinging gates.

The other side of the large stone archway tells a little of the story. All that remains there is a small, twisted nub of iron where the second half of the gate used to be.

There are also chunks of the century-old stone missing.

Mallory Morgan, superintendent of the cemetery, said she was in a deep sleep on Feb. 22 when her children woke her in the middle of the night. Something had happened at the gates. Someone had crashed into them.

Morgan said whoever hit the locked gates hit them with force, sending one of the gates flying off its hinge and into some nearby pine trees.

“I was shocked,” Morgan said.

Morgan said she called the police, but there were already some officers on their way.

According to information from the Ironton Police Department, an officer responded to a domestic violence call at a home in the 2800 block of South Ninth Street at about 1:45 a.m., just a few blocks from the cemetery.

The suspect had left the scene before officers arrived. Officers drove down Ninth Street and saw the cemetery gates had been damaged. There was no suspect at that scene either, but Morgan had a description of the truck that caused the damage.

In Coal Grove, officers stopped a man in a truck for suspicion of operating a vehicle while intoxicated. That man refused a blood alcohol test, according to information from the IPD.

Bryan Bryant, 46, of 2839 S. Ninth St., Ironton, was arrested and taken to the Lawrence County Jail.

According to Ironton Municipal Court records, Bryant was charged with misdemeanor counts of OUI, reckless operation, driving without insurance, domestic violence and criminal damaging. Bryant was released from jail that night on a $2,500 bond.

He appeared in court on Feb. 24 and pleaded not guilty to the charges. Bryant has a pretrial hearing on Thursday and has retained attorney Scott Evans to represent him.

As for the damage to the gates, Morgan said a Cincinnati-based restoration company estimated the cost to fix the stone pillar at about $3,200.

“That was based on the pictures we submitted,” she said. “It may be more.”

The gate is beyond repair Morgan said. A replica will have to be made, but the cost has not yet been determined.

“We are working through the insurance company,” she said, adding that there may be an estimate in the next few weeks.

The driver of a Ford Ranger was uninjured following a collision Tuesday morning with a parked car. Hillary Nance, 22,... read more