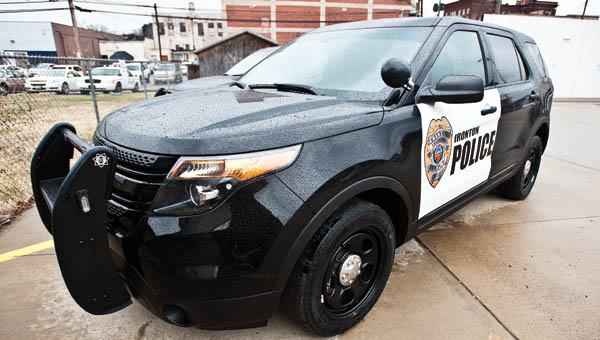 One of the new Ironton police cruisers.

The Ironton Police Department’s four new Ford Police Interceptor Utility cruisers have been outfitted and are ready to hit the streets of Ironton.

“You have probably seen or heard we do have four new police cruisers that will soon be on the road so we are glad about that,” Ironton Mayor Rich Blankenship said, at Thursday’s meeting of city council. “I appreciate everybody’s efforts in being able to obtain these by saving (money) throughout the years.”

“Other law enforcement agencies have inquired,” Blankenship said. “In the past we have given other agencies first dibs on them.”

The retired cruisers will be appraised and sold at fair market value, Blankenship said.

Aside from vehicles such as wastewater, garbage and dump trucks the city’s current vehicle fleet isn’t any different from the makeup in the past.

“All of our department heads who have a city-owned vehicle are required to drive for their jobs,” Blankenship said. “We are all over the place for everything all the time.”

In addition to the police department’s 15 cruisers, which are included in the city-owned fleet, the fire chief, wastewater treatment plant supervisor, mayor, water superintendent, recreation director, code enforcement officer and street, sanitation and flood supervisor have vehicles supplied to them by the city.

“The water treatment plant supervisor doesn’t take his vehicle home,” Blankenship said. “My vehicle and the other department heads’ vehicles are for all employees of that department. If someone needs mine to go to training or something, I give them the keys.”

The recreation department vehicle is supplied so the employees can adequately haul equipment, Blankenship said, and the most recent upgrade other than the police cruisers is the code enforcement vehicle.

“I think it’s important we provide cars,” Blankenship said. “We can’t take care of problems over the phone; we have to be there. If an employee uses their own vehicle, it becomes a liability for the (the city) and for their personal insurance carrier. These vehicles are for work-related use, they aren’t for anyone to do just anything they want to with them.”

Oftentimes, Blankenship said, if it is requested that an employee be somewhere and he is already in the vicinity in his personal vehicle, he will use it.

City of Ironton Finance Director Kristen Martin said there was more activity in 2013 than in recent years because of the Neighborhood Investment Bond Program administered through Lawrence County Treasurer Stephen Burcham’s office. The police cruisers ($162,000) and a refuse truck ($128,000) were purchased through the Neighborhood Investment Program, which is available to all villages and municipalities in Lawrence County.