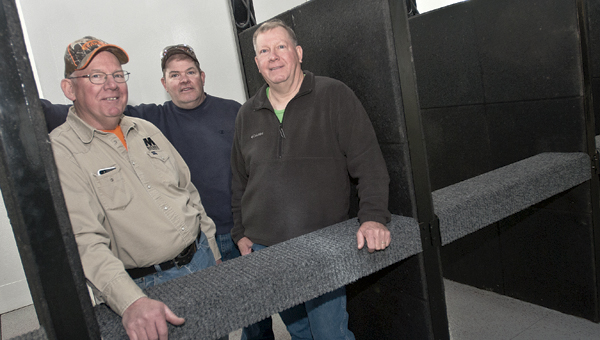 KITTS HILL ­— As an avid hunter and former police officer, Lynn Harper has set his sights inside his fair share of shooting ranges. But, a little more than a year ago, along with his brothers Dwain and Mark, Harper set his sights on opening a shooting range of his own.

“In December of 2012 we put a bid on this land just because it was close to where our mom lives,” Harper said. “We ended up getting it and at first we were unsure of what we were going to do with it.

We had talked about opening up an indoor shooting range before and we kind of came back to that idea. This time we just decided to run with it.”

The facility just past the nine-mile marker on State Route 141 includes a waiting area, a classroom and a state-of-the-art range that features 12 shooting lanes, 10 of which hold targets on automated runners. Shooters can take aim at targets at a distance of up to 50 feet. Most importantly, the range has been designed for safety with more than 65,000 pounds of reinforced steel lining the walls, floor and ceiling.

The walls, ceiling and the barriers dividing each lane are also lined with ballistic rubber which absorbs the fired rounds, keeping the bullet from fully penetrating.

“I’ve been to a lot of shooting facilities all over the place,” Harper said. “So I’ve seen how the good ones are constructed. The No. 1 thing we wanted to do was provide a safe place for parents to bring their kids and teach them how to use a firearm responsibly.

With all the steel and the ballistic rubber there is no way a bullet can get out of the room. There is also no way to accidentally shoot someone through the barriers.”

Sticking with the theme of safety the K-Hill Indoor Shooting Range will have four certified range safety officers on staff supervising the shooting. The range will also offer concealed carry and gun safety classes.

“We are going to have our first concealed weapons class at the end of the month,” Harper said. “Hopefully people will see that we’ve taken the steps to make this place family friendly, fun and educational.”

Harper has also registered to receive a firearms license that will allow him to sell and rent weapons at the range.

“Hoping to get the license in real soon,” he said. “But, you know how it is, dealing with the government those things take time but eventually that’s something we will offer.”

The Kitts Hill range is the only indoor range in the Tri-State and Harper is confident that it will bring the shooting sports to life in Lawrence County. The range is set to host its first tournament on March 20, with plaques awarded to the top-three finishers.

“The only other indoor ranges in this area require folks to drive to Lexington, Ky. or Columbus,” Harper said. “So we are bringing them a place to participate right here in their own county.”

The opening of the range has been a long time coming for the Harper brothers, and the business will be dedicated to the memory of their late father Alvin, who died two years ago this month.

“He always wanted to do something like this,” Harper said. “He was the one who got us into hunting and shooting. We just want to dedicate it to him. It’s been a long process over the last year or so but God has been with us since day one and been ahead of us on every step.”

All handguns .44 caliber and under will be permitted for use at the range as well as rifles that do not use rounds larger than .22 caliber. The K-Hill Indoor Shooting Range hosted its grand opening on Saturday.

Concert set for today at OUS