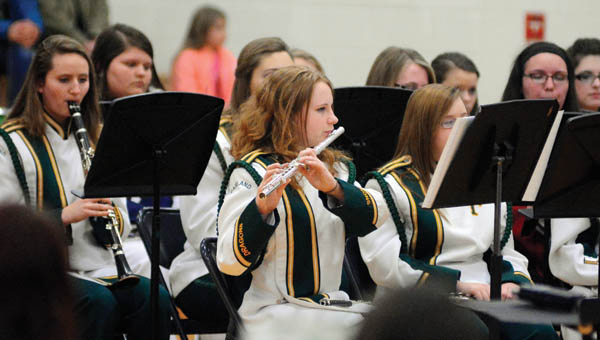 The top student musicians in the county comprise the All County Band that gave its annual concert on Tuesday at Chesapeake High School.

CHESAPEAKE — The best middle and high school musicians showed off their talent and technique at the annual All County Band concert on Tuesday.

“The All County Band was formed close to 90 years ago in some form or fashion,” Chris Wyscarver, band director for Chesapeake schools, said. “It is the collection of the best musicians in Lawrence County in all seven school districts.”

Students are chosen in auditions conducted by independent judges and are ranked by chair.

Once a year this special band performs a concert each spring that takes an additional expertise.

“They get a day and a half to learn the music,” Wyscarver said.

The student musicians work for three hours after school on Monday and then all day Tuesday to get ready for that night’s performance.

“This expands their playing ability because it is much more difficult music,” Wyscarver said. “And you have to be able to sight read. You may run through it once in rehearsal.”

This year Chesapeake schools hosted the concert. Next year the Dawson-Bryant district will play host.

“The band gives them a chance to play with other kids in the county they normally wouldn’t get to play with,” Wyscarver said.