Baker adjusting to life after baseball 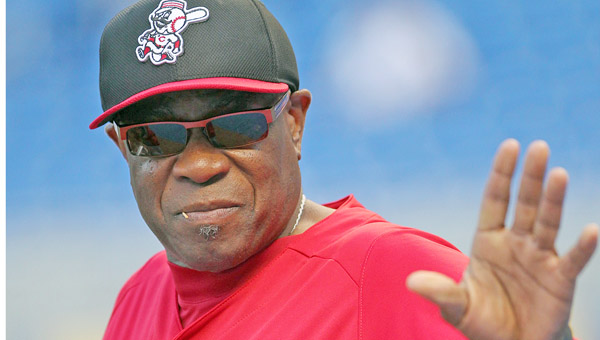 Former Cincinnati Reds’ manager Dusty Baker is adjusting to life without baseball. Baker made inquiries about open managerial jobs over the winter but did not get any return calls. (MCT Direct Photos)

GRANITE BAY, Calif. (AP) — Dusty Baker looks at his overgrown collard greens and heads to the shed for his scissors. It’s time for an impromptu harvest in his garden.

While his former players and fellow managers are preparing for opening day, Baker is busy tending to his crops, planning his summer vegetables and minding his vineyard and fruit trees.

Out of uniform for just his third season as an adult, this marks his first time away since 2007, between managerial jobs with the Cubs and Reds.

Baseball is still close to Baker’s heart, that’s for sure. But after being fired by Cincinnati last October, he is working on more than a half-dozen business projects at once out of his Sacramento-area home — not to mention helping 15-year-old son Darren and his freshman pals with their swings in the family batting cage.

Baker ventures out to the occasional college game.

“I need my fix sometimes,” he says. “Games go slower in the stands. Games are a lot faster in the dugout.”

The 64-year-old Baker made several inquiries about open managerial jobs over the winter but says he didn’t receive a single call back.

Not that he is letting it bring him down. The family time with wife Melissa and Darren helps fill the void.

“It’s been pretty cool,” Baker says, then acknowledges, “I miss the action. I don’t miss before or after games.”

He moves about his expansive property, complete with solar power, with no sign of that signature toothpick he used to swish in his mouth while managing. Baker did have to deal with a cracked tooth because of all the chomping he did on ice cubes over the years.

While strolling through his vineyard, which has already given him three grape harvests, Baker mentions a short bout with what he figures was depression. Having a tough time getting up in the morning, he asked a buddy what might be wrong.

“I never knew depression,” Baker says. “I’ve got nothing to be bitter about. Life’s good for me. I’m not saying I don’t wake up upset every once in a while. I make sure I don’t stay there. You’ve got to get up and realize life is good. I don’t have anything to be sad or depressed about.”

He snapped out of the funk in a hurry, deciding he wouldn’t let such feelings control him or keep him from new adventures.

Just like his late father, Baker finds a comfort outdoors growing vegetables. It has benefited his healthier diet, too, something Baker had to take far more seriously following an 11-game stint away from the Reds late in 2012 — including the NL Central clincher and Homer Bailey’s no-hitter — while healing from a mini-stroke and irregular heartbeat.

He is also growing mustard greens, red cabbage, romaine lettuce, leeks and onions, and had beets and Brussels sprouts specifically for Darren.

Johnnie B. Baker, Sr., who died in November 2009, introduced the therapeutic hobby.

“My dad always had a garden,” Baker recalls. “My dad had a green thumb, and I got the green thumb. I don’t like grease, I like dirt.”

His daughter, Natosha, designed the label for Baker Family Wines.

He will open a tasting room on Treasure Island off the Bay Bridge, which separates San Francisco and Oakland.

“I don’t have enough wine to service everybody,” he says with a grin.

Inside his wine cellar, prosciutto hangs during its drying process.

Whether Baker will return to the top dugout step, he doesn’t know. Yet there is something still missing: He never won a World Series in 20 years as a skipper.

“I have some unfinished business,” he says.

Baker knows he’s not always in charge of what’s next.

“I lost my beets, man, the frost got them,” he says. “I don’t like beets, but Darren does. I had to plant beets and Brussels for him.”

Last week, Baker underwent a minor heart procedure with the goal that he will no longer need medication. He wore a heart monitor on the road last season, he has watched his diet and alcohol intake and exercised more.

“My doctors were trying to get me through last year,” he acknowledges. “I saw every cardiologist, radiologist, every ‘ist in the world. I’m a lot better than I was last year.”

After the recent procedure he reported some minor soreness but otherwise called it a success.

Baker has also recovered from having his wisdom teeth out, noting, “I had had the time and I wanted to take my mind off baseball.”

He spoke to new Reds manager Bryan Price a couple of months back, but says, “I let them do their own thing, it’s their ship now.”

Baker is building a home on Kauai, one place where he can truly relax.

Back on the mainland, mixed among his dozens of framed photos of famous people and art pieces is a print of “It’s a Wonderful Life,” the 1946 holiday film that Baker watches each year as a gentle reminder.

“It’s one of my favorites when you’re down and out,” he says. “There was a time I wasn’t doing real good.”

In August, his daughter will get married in the backyard.

“Maybe I’m supposed to be off to marry my daughter,” he says. “I prayed for my daughter to find someone.”

And Darren, who at 3 1/2 famously ran into the action during the 2002 World Series as a bat boy and nearly was run over before the Giants’ J.T. Snow scooped him up, is growing so fast. Baker just resurfaced their basketball court, and has old bleacher seats from stadiums at all of his stops as a player lining the batting cage.

“I’ve been blessed,” Baker says. “Baseball’s been good for me. I don’t have any regrets. They don’t owe me anything.”