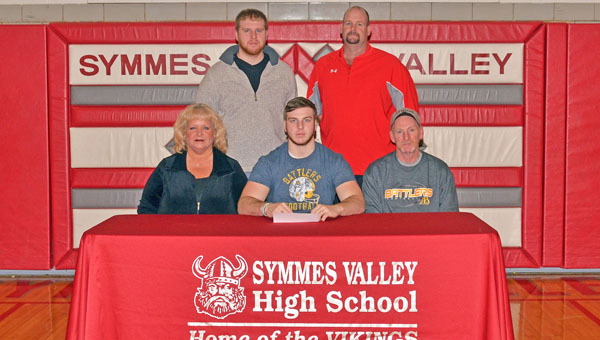 WILLOW WOOD — Philip Combs was always a battler on the football field. Now he is officially a Battler.

Combs signed a letter-of-intent Friday to play for the Alderson-Broaddus University Battlers.

The 6-foot, 205-pound senior lineman was a two-year starter and All-Southern Ohio Conference player for the Vikings.

Although he has been a lineman on offense, Combs had played inside linebacker on defense. He said the Battler coaches plan to use him at linebacker and he knows it will take a lot of work to earn playing time.

“I might see a little bit of time on special teams and see where it goes from there,” said Combs. “It’ll take a lot of hard work, summer work, working out every day, and dedication.”

Vikings’ coach Rusty Webb if hard work will be the reason Combs is an early contributor to the A-B program, that shouldn’t be a problem.

“Philip two-year starter and worked extremely hard in the weight room,” said Webb. “Obviously, he has to get bigger, stronger, faster, but anytime you move up a level that’s what you have to do. I believe he’ll rise to the challenge.”

The Battlers are a NCAA Division II program that restarted their varsity program in 2013 after an 80-year hiatus. Alderson-Broaddus finished 4-7.