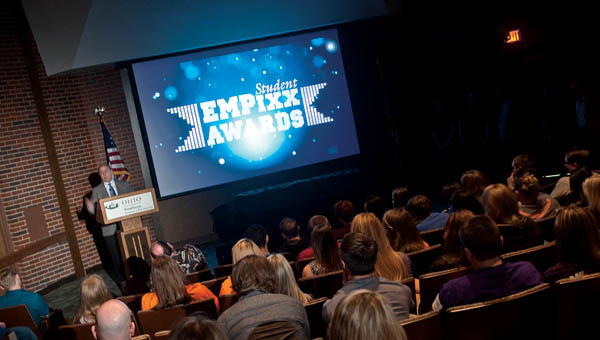 Students from the Tri-State gather in Bowman Auditorium, at Ohio University Southern, as they take part in the Student EMPixx Awards event Friday. (RIGHT) Fairland students Seth Graybeal reacts as Fairland is announced as a winner.

Ironton High School senior Shawn Cosby clenched his fists and took a deep breath in anticipation. When he heard his name, he sprang from his seat and began the walk that would end with his accepting a first-place award for best animation.

Cosby was one of the more than 140 students from eight area high schools who were in attendance on Friday when the winners of 15th annual Ohio University Southern Student EMPixx Awards were announced in the Bowman Auditorium.

A promotional video about the OUS electronic media department was shown and a montage comprised of clips from entries was shown prior to announcing the winners.

“We emphasize hands-on education,” Don Moore, associate professor and director of the OUS electronic media department, said. “Our department provides the education, tools and confidence our students need to do their jobs.”

Now in its 15th year, the goal of the EMPixx Awards is to give high school students an outlet to showcase their talents.

“Students compete in sports, band and academics,” Moore said. “We wanted to recognize those students with artistic talent in audio, video and multimedia areas. The awards program also gives us the opportunity to introduce the students to professionals in the field through workshops they attend during the morning sessions.”

The competition is open to high schools in Ohio, West Virginia and Kentucky that have a video/TV/computer animation production class and students who are exploring these fields on their own. The electronic media department of OUS presents the annual awards to recognize high school-level video production and computer animation excellence.

Moore said the competition gives high school students an opportunity to showcase their artistic ability while engaging with fellow students from different schools.

“Not only does this give them the chance to put a trophy in their school’s trophy case, it also gives them a forum to meet students with similar interests,” Moore said. “It also gives us a chance to bring them to campus, which is always a plus. When they see your facility, your campus and see what your students are doing, it is a good thing.”