Reds rebounding from one of worst starts 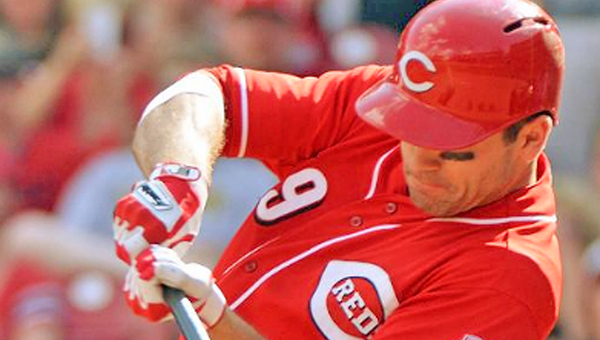 Cincinnati first baseman Joey Votto has flourished since being moved to the No. 2 spot in the Reds’ batting lineup. (Photo Courtesy of The Cincinnati Reds)

CINCINNATI (AP) — The Reds have emerged from their worst start in two decades.

A 4-0 win over the Pittsburgh Pirates on Wednesday gave Cincinnati its first consecutive victories and winning series this season. Johnny Cueto pitched one of the best games of his career, a three-hitter for his third shutout with a career-high 12 strikeouts.

And the Reds left town feeling things were finally coming together after two very bad weeks.

“Our expectations are nothing short of going to the playoffs,” shortstop Zack Cozart said. “It’s early in the season.”

In a sense, Cincinnati’s season is just getting started.

The Reds opened with eight players on the disabled list, the most in the majors. Among the missing: closer Aroldis Chapman, setup relievers Jonathan Broxton and Sean Marshall, starter Mat Latos and catcher Devin Mesoraco.

One by one, they’re getting them back. And it’s making a difference.

Mesoraco returned from a strained oblique and became Cincinnati’s hottest hitter. An offense that was second-last in the majors in runs has started scoring them in bunches. Mesoraco has gone 11 for 22 in six games with three doubles, three homers and nine runs batted in.

“I think confidence is a factor,” manager Bryan Price said. “The oblique was a setback, but he came back strong and he’s kept it going. I think it helps knowing that he’s our catcher and he’s going to play.”

With leadoff hitter Billy Hamilton struggling — a .170 batting average and a .220 on-base percentage — Price moved Joey Votto up one spot in the order to second. Whether it’s just coincidence, Votto started hitting after the move, going 8 for 17 with three homers.

“I really don’t know if it make too much of an impact overall,” Votto said of his batting order shift. “I think it’s pretty minimal.”

Once Cincinnati’s best hitter started producing, the team-wide slump ended. The Reds have scored 30 runs in the last four games after managing only 28 runs in the first 11 games.

“The first week or two, we faced really tough pitching,” Cozart said. “It’s tough when you get off to a bad start. Joey’s swinging a hot bat, and the rest of the lineup is feeding off that.”

The bullpen was the other problem during those tough two weeks, missing three of its key performers.

Chapman was hit on the forehead by a line drive on March 19 and had a plate put into his forehead to help fractures heal. He had to rest completely for a few weeks, but has started getting back into shape.

He threw off a mound for the first time on Monday and will have a bullpen session every three days for the next couple of weeks, building up his stamina. The next step will be having him throw to Reds batters so they can see how he reacts.

The Reds are hopeful the he’ll be back sometime in May.

“His arm’s in great shape,” Price said. “It’s just getting his endurance because he was really shut down in all capacities (after the injury). He wasn’t able to condition a great deal.”

In the meantime, Broxton has returned and can fill in as the closer. He wasn’t fully recovered from forearm surgery when the season began, but was activated last week and got only Cincinnati’s second save of the season.

“He helps solidify our bullpen by being able to nail down the ninth inning for us,” Price said. “Jonathan gets lefties and righties out. He has a history as a closer.”

Marshall is on a minor league rehabilitation stint and could be activated during a 10-game trip. The Reds were off on Thursday before starting a series Friday at Wrigley Field.

The low point of the two-week slump was a 1-0 loss to Tampa Bay on Saturday that left Cincinnati 3-8, its worst start since 1995. Price held a team meeting afterward and reminded his players that they have a good team.

They’ve won three of the last four, including the series against the NL Central rival Pirates that felt like a turning point.

“There are no must wins in April, but I think it set the tone by playing a tough team at home and getting the win,” Price said.

Vikings rally in seventh to edge past Redmen, 5-4

Jim Walker jim.walker@irontontribune.com   AID — What a difference a day can make. After suffering one bad inning in a... read more