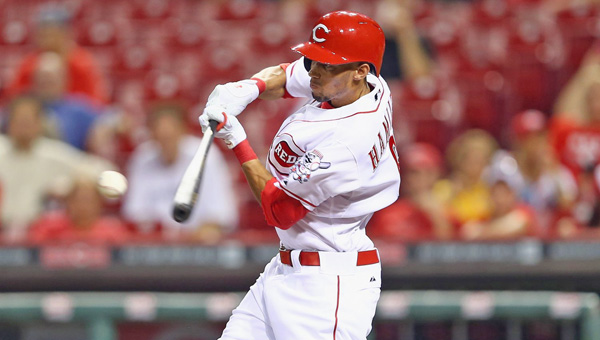 CINCINNATI (AP) — Billy Hamilton had a keepsake ball from his best all-around game.

Hamilton hit his first career homer and Chris Heisey singled home the tiebreaking run in the sixth inning, sending the Cincinnati Reds past the Chicago Cubs 3-2 Tuesday night in a game delayed three times because of rain.

Hamilton’s solo homer off Jeff Samardzija (0-3) tied it in the fifth. He also reached base by a walk and two infield singles, stole a base and made a diving catch in center field. Of all those things, the home run was the most unexpected.

“It’s a good feeling for me,” Hamilton said. “That’s not what I want to do, but sometimes, it happens.”

Zack Cozart tripled to right-center with two outs in the sixth, and Heisey’s pinch-hit single put the Reds ahead as heavy rain started to fall and the third rain delay followed.

“I haven’t had a lot of opportunities lately, but I make it a point to stay ready,” said Heisey, who is 4 for 10 with six RBIs off the bench.

Alfredo Simon (4-1) gave up five hits, including Starlin Castro’s two-run single, before Heisey pinch-hit for him. Simon has filled in while Mat Latos recovers from knee surgery and a sore pitching forearm.

“I’m not surprised that he’s been competitive,” manager Bryan Price said. “What’s been surprising at times is how much of a shut-down pitcher he’s been. We’re happy that he’s been presented with the opportunity and run with it. He’s been a key cog.”

Jonathan Broxton retired all three batters in the ninth for his fifth save in five chances.

The Cubs have lost five of their last six games, falling to 8-17.

The series opener on Monday was postponed because of rain and hasn’t been rescheduled. The Reds have had seven rain delays in 11 home playing dates this season, with one game postponed and another suspended overnight.

It was another solid but winless performance for Samardzija, who has not gotten a victory in his last 12 starts since Aug. 30. The Cubs haven’t scored while he was on the mound — only 32 runs in those 12 starts.

Samardzija was in line for a win in his last start, but the bullpen blew a 5-2 lead last Wednesday in a 7-5 loss to Arizona.

Hamilton had his most productive game as Cincinnati’s leadoff hitter. He scored twice, giving him 12 runs this season.

“Every day I come in here, I’m trying to do something good for the team, whether it’s a sacrifice fly or a stolen base or scoring a big run,” Hamilton said. “It was fun today.”

Hamilton opened the first inning with a walk, stole second and took third on a wild pitch. Brandon Phillips’ sacrifice fly made it 1-0.

Hamilton had an infield single in the third and was thrown out by catcher Welington Castillo, the fifth time in 15 attempts that he’s been caught stealing this season.

The Cubs loaded the bases in the third on singles by Emilio Bonifacio and Ryan Kalish and a walk to Anthony Rizzo. Castro singled up the middle on the first pitch for a 2-1 lead.

Hamilton shortened to bunt twice in the fifth inning before hitting his first career homer to right field, tying it 2-all.

Cubs second baseman Darwin Barney made the best defensive play of the game. He went up the middle to reach Ryan Ludwick’s grounder in the fourth, got to the ball on the third base side of the bag and threw Ludwick out from the outfield grass.

NOTES: Cubs manager Rick Renteria was ejected for arguing ball-and-strike calls in the bottom of the sixth. … Renteria expects RHP Jake Arrieta to be activated and start on Saturday. He’s been sidelined by stiffness in his pitching shoulder. … Reds closer Aroldis Chapman threw 25 pitches during batting practice. He’s expected to make his first rehabilitation appearance with Class-A Dayton on Thursday. Chapman had a plate inserted above his left eye to heal fractures from a line drive on March 19. He could be activated next week.

Chapman will use rehab start as final test