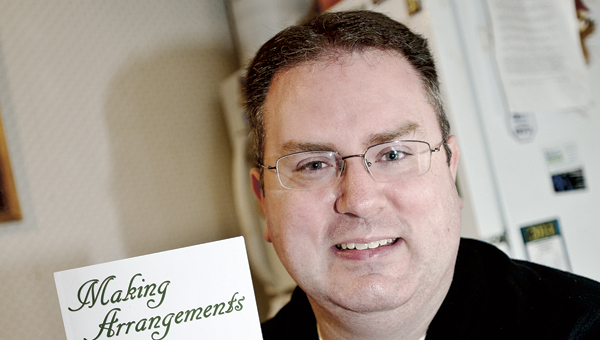 CHESAPEAKE — The third novel of a Chesapeake-based writer and English professor is a rite of passage drama.

“Making Arrangements” is the story of a young man facing the death of his father and the subsequent decisions he is forced to make and a creation from the imagination of Eliot Parker.

“I like to write true-to-life fiction,” Parker said. “It could be based on a real life event. When you look at a real story, it is so interesting, so multi-faceted.”

Parker, who is an associate professor at Mountwest Community and Technical College, started writing short stories as a hobby when he was studying journalism at Marshall University.

After he went on to graduate school at Marshall to study English, he was encouraged by a friend to submit some of his stories to literary journals.

“I thought nobody wants to read what I have written,” Parker said. “But I sent it in and it got published.”

That started Parker writing a series of short stories and then he decided to try his hand at a novel.

“I’d always heard a novel is a series of short stories in a book,” he said.

Parker wrote his first novel, “The Prospect” in 2008, about a minor league baseball team in West Virginia.

He followed that with “Breakdown at Clear River,” a murder mystery set on a college campus amid a steroid scandal in the football program. That was nominated for a Weatherford Award given by Berea College and the Appalachian Studies Association.

“I enjoy getting to create something totally from scratch,” he said. “I have total control of everything on the page. In my day job I am always watching the clock. When I am writing, I can write for as little or as long as I want to. Some days I can write a hundred words. Sometimes I can write a thousand words.

However getting those pages published can become a full-time task in itself as Parker will send out query letter after query letter.

“I can send out 50 queries and five want to see more of the book,” he said. “Twenty are rejections and 25 I never hear back from.”

What keeps him motivated is a desire to make the next book better than the one he has just finished.

“Whether that materializes or not,” Parker said.

But getting published isn’t his only goal.

“If I never got a book published again, I would continue to write.”