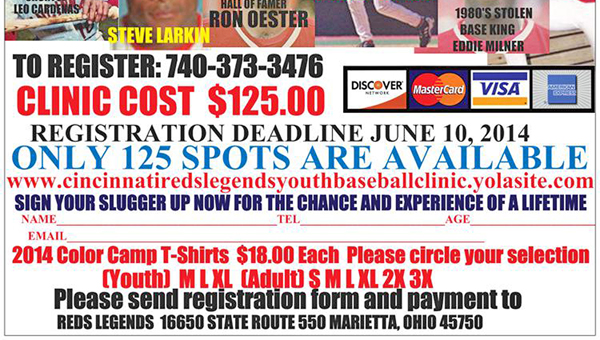 MARIETTA — When they call this the Cincinnati Reds Legends, they aren’t kidding.

Three Reds’ Hall of Fame members and a possible future inductee will headline this year’s annual Cincinnati Reds Legends three-day youth baseball clinic will be held June 16-18 at the V.F.W. Field in Marietta for youths ages 4-19.

Meals and drinks will be provided daily. Fee is $125 and registration deadline is June 10. To register, contact (740) 373-3476 or use the registration form provided at left or go online at cincinnatiredslegendsyouthbaseballclinic.yolasite.com

Oester will be inducted into the Reds’ Hall of Fame this summer. Oester was a long-time second baseman and a member of the 1990 world championship team.

Outfielder Reggie Sanders went on the Reds’ Hall of Fame ballot last year and has some impressive numbers throughout his career.

Todd Benzinger was the first baseman for the Reds’ 1990 world championship team. His son, Grtant, was a senior basketball player at Moeller this past season and signed with Wright State.

Eddie Milner led the Reds in stolen bases in the 1980s and was a steady player in centerfield.

Carroll — second on the Reds’ all-time saves list — was elected to the Reds’ Hall of Fame in 1980. Carroll was a prominent figure in the bullpen during the 1970s including the 1975-76 world championship teams.

Cardenas was a Gold Glove winner at shortstop and he was elected to the Reds’ Hall of Fame in 1981.

A name that is familiar to Reds’ fans is Larkin, but this is Steve Larkin, brother Hall of Fame shortstop Barry Larkin. Steve Larkin was not only an outstanding baseball player in his own right, but was a talented basketball and football player, too.

A lost art in baseball is bunting, but former Reds’ outfielder and bunting specialist Herm Winningham will be at the clinic to help teach youngsters not only how to bunt but the importance of this facet of the game.

T-shirts are available for $18 in youth sizes M-XL and adults to 3XL.