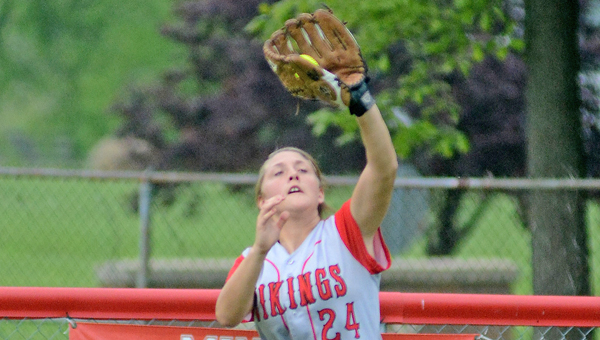 MINFORD — The Symmes Valley Lady Vikings did all they could, but it wasn’t enough.

“We stepped up to the plate and hit the ball, but we couldn’t find a hole or a gap. We hit six balls to the outfield and they made three real good plays,” said Lady Vikings’ coach Jeff “Odie” Estep.

“This is probably the best game Payne has thrown all year and we made some nice plays behind her. Hannah Maynard made two nice plays.”

Harr only struck out four and walked three, but Estep said she kept the Lady Vikings’ off-balance.

“Harr’s not the hardest thrower, but she’s the best pitcher. She can pinpoint where she wants to throw it and she has three different pitches she can throw for strikes,” said Estep.

Harr hit a one-out solo home run in the second inning and made it stand up.

The Lady Titans got an insurance run in the sixth inning.

Madi Phillips reached on an error, went to third base on a sacrifice bunt and a fly out and scored on a single by Elayne Born.

The Lady Vikings end the season 15-9.

“We played hard and we had a good season. We just have to get ready for next year,” said Estep.

WASHINGTON (AP) — Johnny Cueto was having a season of such historic proportions that it was totally unrealistic to expect... read more