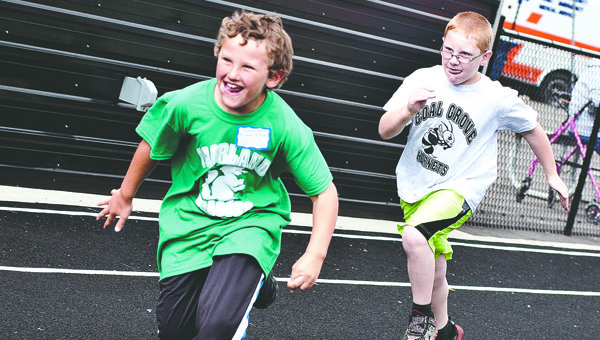 Donnie Nolan, a student at Fairland schools, becomes very excited as he passes his competitor during the boys 50-meter dash event at the Lawrence County Special Olympics event Tuesday in Chesapeake.

The gun sounded and a line of young children came racing down the track at Chesapeake High School on Tuesday during the boy’s 50-meter race of the Lawrence County Special Olympics.

As the athletes crossed the 50-meter finish line Amos Bryant, a student at Open Door School, was the clear winner. But, just to make sure, the young speedster ran another 120 meters.

“Did you see me? I was like VROOM,” a winded, but smiling Bryant said, while displaying his gold medal for the 8-9 year old division. “Winning this medal feels really good.”

Bryant credited his cousin for helping him train at home to gain some extra speed for the race.

While athletes like Bryant trained for their events, other athletes, like Coal Grove’s Ashley Baldwin and Hannah Ghee, who both took home gold medals in their respective divisions of the girl’s softball throw, did not.

For Baldwin, it was her first ever Special Olympics medal and it came in an impressive fashion as she registered a 24-yard throw to win the girls 10-11-year-old gold.

“This is my first medal and it’s really exciting to win,” Baldwin said. “It was a lot of fun.”

At the end of the day gold, silver and bronze medals were awarded to athletes in 34 different events. The podium results of each competition were announced over the PA system to loud cheers and applause at Phil Davis field.

“This day is about them,” Emma Hudson, a student a Chesapeake High School, who volunteered to work the event, said. “This is their day to shine and I’m so glad to be a part of it.”

Each school within the county was represented during the games with each school boasting at least one gold medal-winning athlete.

The dedication of volunteers who put in countless hours to the Ironton-Lawrence County Memorial Day Parade was praised at this... read more