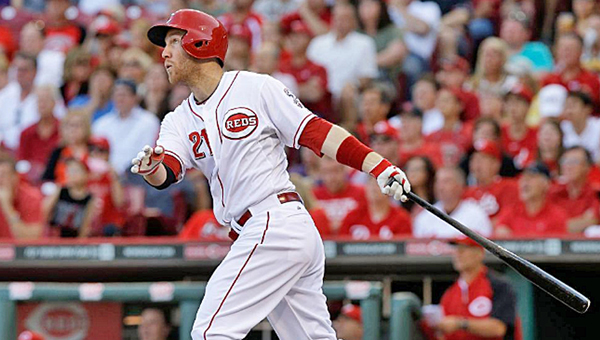 Todd Frazier connects for a three-run homer to lead the Cincinnati Reds past the St. Louis Cardinals 5-3 on Friday. Devin Mesoraco added a solo home run for the Reds. (Photo Courtesy of The Cincinnati Reds)

CINCINNATI (AP) — Todd Frazier needed one at-bat to get used to his new place in the order.

Moved into the second spot as Cincinnati tries to get through its stretch of injuries, Frazier struck out his first time up against Shelby Miller. The next time, he had the swing that changed the game.

Frazier hit a three-run homer off Miller, who had won his last six decisions, and Devin Mesoraco added a solo shot as the Reds beat the St. Louis Cardinals 5-3 on Friday night and tightened the top of the NL Central.

The Reds moved within three games of the second-place Cardinals, who have won seven of their last nine games while staying right behind the division-leading Brewers.

Cincinnati is 3-4 against St. Louis this season and trying to end a longstanding trend this weekend. The Reds have lost nine of their last 10 series against the Cardinals.

Frazier is more accustomed to batting in the middle of the order, but got moved up as manager Bryan Price tries to get by without injured No. 3 hitter Joey Votto.

“My first time up, I couldn’t see,” Frazier said. “I was confused. I’m not used to batting in the first inning.

“The next time, I wanted to see what kind of damage I could do with runner on base. I got a pitch I could see.”

Miller (6-3) lost his first two starts before winning six straight decisions, the best such streak of his career. He allowed five runs in five innings, including Frazier’s ninth homer in the third inning off a pitch that was up in the strike zone.

Homer Bailey (4-3) escaped numerous threats during his six innings. Aroldis Chapman gave up a hit in the ninth while getting his fourth save in five chances, with his fastball topping out at 102 mph.

Bailey was coming off his worst start of the season. He lasted only 3 2-3 innings and gave up a season-high six runs during a 12-1 loss at Philadelphia on Saturday. The right-hander is only 6-10 career against St. Louis, by far his most losses against any team. He gave up eight hits — all singles — and three runs, including Allen Craig’s two-run single in the fourth.

“With this team, it’s kind of weird,” Bailey said. “I’m usually really good or really bad. Today was kind of in-between. I tried to limit the damage. I’m glad I was able to hold them to singles.”

Jhonny Peralta drove in another by hitting into a fielder’s choice in the sixth. Bailey avoided further damage by picking Peralta off second base to end the inning with pinch-hitter Jon Jay batting.

“You don’t see it much anymore,” Bailey said of the pickoff at second base. “I knew a good throw would get him.”

The Reds had right fielder Jay Bruce back in the starting lineup. He hadn’t played since surgery on May 5 to repair torn cartilage in his left knee. Cincinnati is still missing Votto, on the disabled list with a strained muscle above his left knee.

Bruce doubled and scored on Brayan Pena’s sacrifice fly in the fourth inning for a 4-2 lead. Bruce also struck out twice and grounded out with two runners aboard to end the seventh.

Pena played first base and made a saving defensive play to open the eighth. He dived to the line to get Matt Holliday’s leadoff grounder and, while still on his chest, flipped the ball to Jonathan Broxton covering the base to get the out.

Reds leadoff hitter Billy Hamilton walked, reached on a fielder’s choice and stole a pair of bases without drawing a throw on either one, giving him 18 this season.

NOTES: A pair of lefties will start the second game of the series. Jaime Garcia is 9-2 career against the Reds, his most wins against any team. He’ll face Tony Cingrani (2-3). … The Cardinals sold the contract of OF Joey Butler to the Orix Buffaloes in Japan. The Cardinals had outright release waivers on Butler, who was at Triple-A Memphis. … The Reds revamped their bench for the series, calling up OF Donald Lutz from Triple-A Louisville and sending INF Neftali Soto back down. … RHP Mat Latos is expected to begin a rehab stint on Sunday with Louisville. He hasn’t pitched this season because of torn knee cartilage and a strained right forearm.

Lt. Cmdr. Matthew Totoro was guest speaker during the Navy Night Memorial Service in Ironton, the first in a series... read more