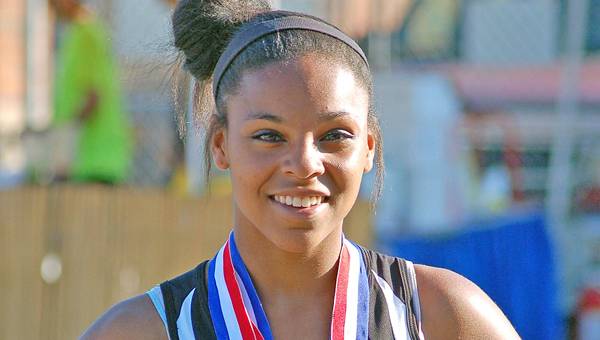 Early in the movie “Talladega Nights: The Ballad of Ricky Bobby,” the race team driver walks off during a pit stop in the middle of the race to get something to eat. That leads pit crew chief Lucius Washington to ask, “Is there anyone who wants to go fast?”

Ricky Bobby jumped at the chance.

Long blistered her way on the track this past season including Saturday, May 25, at the 10th annual Middle School Track and Field Championships held at Dublin High School as she captured the 200-meter dash state championship.

“Kenzie has run the 100, 200 and 400 races all season. She is one of the most mentally-tough and well-conditioned athletes that I or coach (Amy) Perry has ever coached at the middle school level,” said Richardson.

In fact, her time in the state finals was the slowest of her career.

During her career, the eighth-grade sprinter set records in those three races, eclipsing the records formerly held by Mandi Boykin who went on to win a state championship in the 100 meters her senior year.

“It kind of made me nervous (to run in the state meet). I didn’t know how fast they were, but afterwards I found out I can eventually beat them,” said Long.

The state meet was an adjustment for Long since most middle school track athletes do not usually run preliminaries. Long also ran in three events that were scheduled very close to each other.

Long ran a 27.16 in the 200 prelims for the fourth-best time overall, but she redeemed herself by scorching the finals with a 26.87 time to win the 200-meter dash state title.

Dynesty Ervin of Labra Middle School was second at 27.2.

“I really wanted to win the 200-meter dash,” said Long. “After the break I had, I knew I could win. It was fabulous. After being worn out, I was impressed.”

Long said she got interested in track during the annual Field Day events. She also has two brothers who run track including Ironton freshman Isaiah Long.

“I started to get interested in track when I was in the fifth grade and I watched some meets because of my brothers,” said Long.

Jim Walker jim.walker@irontontribune.com   LANCASTER — The Coal Grove Hornets will make it a traveling party. The Hornets will send... read more