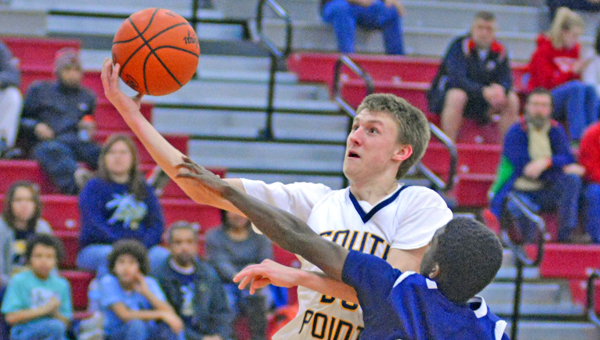 The South Point Pointers’ 6-foot-2 senior guard used a Christmas break workout to land a scholarship to play with the Gyrenes of Ave Maria University in Ave Maria, Fla.

“We sent a highlight film and the coaching staff got a hold of if it and flew up here and worked me out over Christmas break,” said Barnes.

“They had me fly down there and visit in April and it was beautiful. It was hard not to fall in love with it. The only thing you have to worry about are hurricanes and the gators.”

Barnes was a four-year starter for the Pointers and averaged 17.5 points a game along with 3.1 rebounds and 2.8 assists. He hit 48 percent of his shots not only from the field but the 3-point line as well.

“Their offense fits me perfectly. Their two shooters were both seniors so the opportunity is there. How I take care of it is on me. The coaches told me I have the opportunity to shoot and start,” said Barnes.

He was the Coaches’ District 13 Player of the Year and played in the annual North/South All-Star Game.

During his career, Barnes scored 1,545 to become the program’s all-time leading scorer.

“Brandon has been a hard worker all his life. I’ve never had to make him work. When he has any free time, he’s in the backyard or at a gym playing or just shooting,” said Pointers’ coach Chris Barnes who also happens to be Brandon’s father.

The Gyrenes — a NAIA program — were 12-19 last season under head coach Ken Dagostino.

“It’s a pretty good program. It’s going to be a challenge. The league we’re in is pretty good,” said Brandon.

“It’s growing every day. By the time I’m a junior, we’ll have a brand new arena. They’ll be Division II in a few years and eventually they want to be D-1.”

Ave Maria has an enrollment of 863 and requires new students to have an average 24 ACT or 1,655 SAT score as well as at least a 3.5 GPA. The average class size has 17 students.

The Roman Catholic university was founded in 2003 by Tom Monaghan, the founder of Domino’s Pizza.

Watching the Cincinnati Reds’ offense on life support the past few weeks made me realize that I needed to write... read more