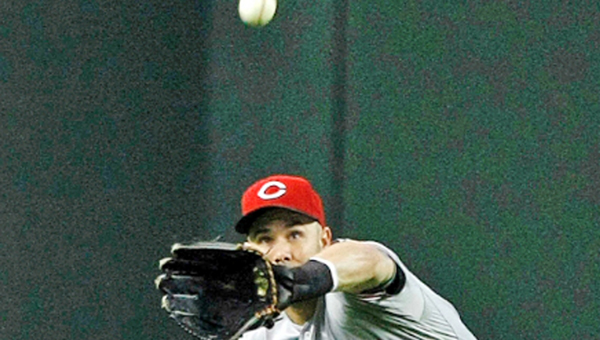 Cincinnati outfielder Skip Schumaker makes a catch in the first inning of the Reds 4-3 win over Arizona on Sunday. (Photo Courtesy of The Cincinnati Reds)

Chris Heisey hit a go-ahead homer in the fifth inning and the Reds connected four times in all, beating Arizona 4-3 on Sunday to take three of four from the Diamondbacks.

Cincinnati led 3-0 after homers by Zack Cozart and Todd Frazier in the third and by Ryan Ludwick in the fourth. Arizona tied it with a three-run fourth, then Heisey’s second home run of the season put the Reds on top for good.

“We’re really not a home-run hitting team,” Frazier said, “but when we do, we win.”

Frazier said the Reds have talked about boosting their energy on the field.

“A little gusto,” he said. “That’s a word I used to use in high school in football. You have to show a little gusto, and I think we’ve been doing that. The energy is there, the fun is starting to come back. We’re just happy we’re playing good ball right now.”

Converted reliever Alfredo Simon (7-3) gave up three runs in 6 1-3 innings. Aroldis Chapman hit 103 mph on the Chase Field radar gun in a perfect ninth, overpowering three batters not long ago in the minor leagues and earning his seventh save in eight opportunities.

Wade Miley (3-6) allowed four home runs in a game for the first time in his career.

“He pitched well except for the four pitches,” Arizona manager Kirk Gibson said, “and those guys hammered them.”

David Peralta singled twice in his major league debut for the Diamondbacks.

The Reds won their last three and four of five to finish their western trip 4-3.

“You fight to win series and get on a roll,” Cincinnati manager Bryan Price said. “That’s four out of five. We’re heading in a nice direction.”

Arizona wrapped up a 3-4 homestand.

“I thought we swung the bats pretty well today,” Gibson said. “We hit a lot of balls and they made some plays on us. It just wasn’t meant to be and that is frustrating.

Cozart hit the first pitch of the third inning into the left- field seats, his second home run of the season, to make it 1-0. After two outs, Frazier hit Miley’s 1-0 pitch into the same area, his team-high 10th homer — and the Reds led 2-0.

Cincinnati made it 3-0 in the fourth when, with two outs, Ludwick homered — also to left.

Arizona broke a streak of 15 scoreless innings in the fourth.

Paul Goldschmidt drew a one-out walk and when Miguel Montero lined Simon’s 3-0 pitch off the wall in right-center for a double.

Montero moved to third on Martin Prado’s single then scored on Eric Chavez’s sacrifice fly to cut the lead to 3-2. Peralta, just up from Double-A Mobile to replace the injured A.J. Pollock, singled to center, putting runners at first and third, and Ender Inciarte singled in the tying run.

Peralta led off the seventh with a single and Inciarte flied out to deep right. That was it for Simon. Gerardo Parra’s two-out single off Sam LeCure put runners first and third but Cliff Pennington lined out to right to end the threat.

Prado singled with two outs off Jonathan Broxton in the eighth and took second on a passed ball. But Chavez popped out to end the inning. Broxton has allowed one run in 18 appearances this season.

Cincinnati loaded the bases with one out in the ninth on an error, single and hit batter against Oliver Perez. Addison Reed came on to get Heisey to pop out and Frazier flied out.

NOTES: Billy Hamilton was a late scratch from the Reds lineup with a sore right elbow. … Arizona had five Venezuelans in the lineup, a franchise record and tied for most in the majors since 1998. Each of them had at least one hit. It was the first time in the NL that a team started three Venezuelans in the outfield. … Pollock, whose right hand was fractured when he was hit by Johnny Cueto’s pitch Saturday night, will undergo surgery in the next few days. Gibson guesses Pollock will be out five to eight weeks. … The Reds return home to open a three-game series against San Francisco on Tuesday. Arizona is off Monday and begins a three-game series at Colorado on Tuesday.

PHOENIX (AP) — Unsatisfied after a pair of losses, Johnny Cueto told his teammates he would pitch well against the... read more