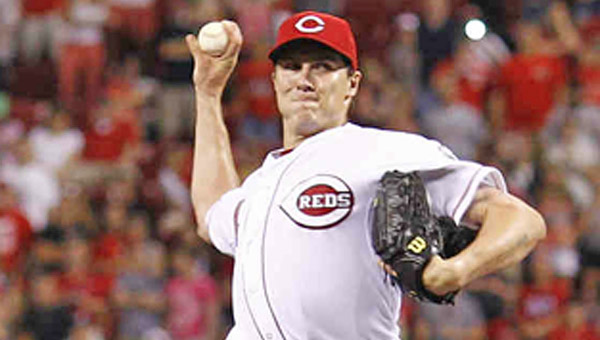 Cincinnati pitcher Homer Bailey will face the San Francisco Giants as the teams begin a three-game series Tuesday. Bailey threw a no-hitter in his last meeting against the Giants. (MCT Direct Photos)

CINCINNATI — Even when it comes to building a little momentum, the Cincinnati Reds can’t catch a break.

The Reds have won four of their past five games, a season-best streak.

However, as they begin a 10-game homestand Tuesday they face the San Francisco Giants who not only lead the National League Western Division but also have the best record in the league at 37-20.

In fact, the Giants have won five of their last six games with the starting rotation registering a meager 1.17 earned run average.

“Four out of five, we’re heading in a nice direction,” said Reds’ manager Bryan Price after Sunday’s 4-3 win over the Arizona Diamondbacks.

“We got some nice little power supply with the four solo homers and a lot of contributions from the club.”

“To end up wining the road trip, you can’t beat that after starting 1-3,” said outfielder Chris Heisey who hit a solo home run in the fifth inning that proved to be the game-winner Sunday.

The Reds will send Homer Bailey to the mound in Tuesday’s opener to face the Giants for the first time since he threw a no-hitter against them on July 2 of last season.

Bailey is currently 5-3 in 11 starts this season with a 5.04 earned run average. He has 56 strikeouts in 64.1 innings pitcher and just 21 walks. Opposing batters are hitting .295 against him but have only a 1.51 WHIP (walks plus hits per innings pitched).

Lincecum was the losing pitcher when Bailey no-hit the Giants.

While the Reds are waiting for first baseman Joey Votto and pitcher Mat Latos to come off the disabled list, rookie centerfielder Billy Hamilton is listed as day-to-day.

Hamilton hurt his elbow making a throw from the warning track to third base after catching a long drive by Paul Goldschmidt during Saturday night’s game at Arizona.

Hamilton was a late scratch Sunday and saw the team doctor on Monday. Although the elbow was sore, Hamilton expects to play in Tuesday’s opener against the Giants.

“It was a shock (Price) took me out (Sunday) because I didn’t know I was coming out. He knows a little better than I do. I feel a lot better now. I got some treatment and got it worked on a little bit. We’ll see how it goes the next couple of days,” said Hamilton.