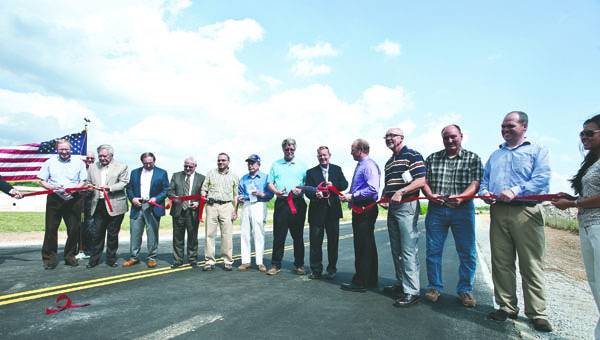 Community and business leaders from the City of Ironton and Lawrence County joined elected leaders at the Ironton Industrial Park on Tuesday to officially open a road that many see as a new industry paradigm.

“It’s a link to growth and development,” Dr. Bill Dingus, executive director of the Lawrence Economic Development Corporation (LEDC), said. “It’s a missing piece of the puzzle; a barrier out of the way.”

Many of those in attendance on Tuesday echoed Dingus’ sentiments about the $200,000 thoroughfare that was completed by Mullins Construction in 90 days.

“This industrial parkway is the result of partnerships among the State of Ohio, Liebert Industries, and city and county leadership,” Darling said. “Local leaders leveraged the investment of Liebert to bring Ohio resources together to finish plans for the full development of the Ironton Industrial Park that were first crafted well over a decade ago.”

Benefactors include Liebert, the county garage, Muth Lumber and businesses that have taken residence around the park, Darling said.

“Open Door School and area residents will benefit by having a majority of truck traffic removed from Lorain Street,” he said.

“This is the former site of a metallurgical coke plant and through most of its history was owned by Allied Chemical,” Dickens said. “It operated from 1970 until the early 1980s.”

“It took a number of years to clean it up but it was finally declared clean, at least this portion of it, and the property was transferred to the City of Ironton,” he said. “ODOT was persuaded to build the state garage over here, which is the property that got this park started. Honeywell built a 5,000-square-foot building that is now being used by a company that makes special aluminum plastic.”

Commerce Drive, Dickens said, is a legacy project of the Ironton Port Authority and he’s “very optimistic” the road will be beneficial.

Ironton Mayor Rich Blankenship iterated the road’s multiple benefits to the city and said he likes being part of projects from start to finish.

“I’m glad this project is finally completed,” he said. “I remember starting it several years ago when Liebert was building on the addition and all the agencies involved to come up with the funding of this project are certainly appreciated. I think this will be a great asset to the City of Ironton, provide better access and also reduce traffic in the residential area surrounding the park.”

“I know a lot of effort goes into coordinating these types of things” he said. “Proverbs tell us that without vision, people perish, and I think this demonstrates the lack of division in this community, especially among the leaders of the community.”

Dingess also said the road eliminates two of the seven “wastes” that exist in manufacturing.

“It’s difficult to be in manufacturing in the U.S. and in order to do that we have to be continually improving; always trying to eliminate the seven wastes in manufacturing and this project represents actually two of those: waiting time and the other is transportation,” he said. “Whenever someone comes to me with a project and say they are going to eliminate two of the seven wastes, I get excited about that.”

The Ohio Department of Transportation, the Ohio Development Service Agency and the LEDC invested equal shares in the road’s cost.

Commemorating the 150th anniversary of the Civil War is the theme of classes this month at the Briggs Lawrence County... read more