Spurs turn up heat on Heat 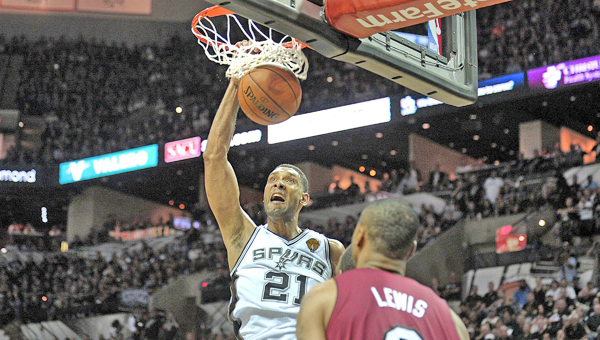 The San Antonio Spurs’ Tim Duncan scores in front of the Miami Heat’s Rashard Lewis (9) during Game 1 of the NBA Finals on Thursday. Duncan had 21 points and 10 rebounds in a 110-95 win. (MCT DIRECT PHOTO)

SAN ANTONIO (AP) — The San Antonio Spurs handled the Heat, and the heat, during a sweltering start to the NBA Finals.

Tim Duncan had 21 points and 10 rebounds, and the Spurs beat Miami 110-95 on Thursday night in Game 1 inside a steamy AT&T Center.

With an air conditioning failure making it feel like basketball in a sauna and causing LeBron James to battle cramps that knocked him out of the game’s decisive stretch, the Spurs pulled away to win the opener of the first finals rematch since 1998.

Manu Ginobili had 16 points and 11 assists, and Tony Parker added 19 points and eight assists for the Spurs, who shot 59 percent and improved to 6 for 6 in NBA Finals Game 1s.

James finished with 25 points but played only 33 minutes, and Miami was outscored 36-17 in the fourth quarter.

Dwyane Wade scored 19 points and Chris Bosh had 18 for the Heat, who wilted in temperatures that soared to 90 degrees in the second half.

“It was tough on both teams,” Spurs coach Gregg Popovich said. “They were pretty dead. We tried to get guys in and out. … It was really hot out there.”

James, who had cramping issues two years ago in the finals, had to ask for a break in the fourth quarter and was getting treatment during a 15-4 Spurs run that turned around the game.

He came back in and made a basket that cut it to two points with about 4 minutes left, but couldn’t even run back on defense, promptly putting his hand up and lingering at the baseline until help arrived to take him off for good.

Danny Green followed with 3-pointer to trigger what became a 16-3 run to end the game.

“It felt like a punch in the gut when you see your leader limping to bench like that. But we still had a chance after that,” Heat coach Erik Spoelstra said.

The crowd chanted “Beat the Heat! Beat the Heat!” in the fourth quarter, which was just what the fans themselves were trying to do.

The Spurs said an electrical failure for the power that runs the air conditioning system had occurred. They apologized for the inconvenience but also seemed to poke fun of it, playing songs with “hot” in the lyrics over the sound system.

Fans were trying to cool themselves on the hot night, a reminder of what it was like in the old Boston Garden when the Celtics and Lakers got together.

The Heat are the first team since those Celtics of 1984-87 to get to four straight finals. They are well-rested after a relatively easy roll through the Eastern Conference playoffs, a key to keeping Wade healthy entering the finals.

But they couldn’t do anything about James, the MVP of the series last year when the Heat rallied from five points down in the final half-minute of regulation to win Game 6 in overtime, then won a Game 7 that was close the whole way for their second straight championship.

A rematch was widely anticipated and was close almost throughout. The Heat led 86-79 after Bosh’s four-point play with 9:38 remaining in the game, but it was all San Antonio from there.

The Spurs ended up extending their NBA-record straight to eight straight home playoff wins by 15 or more points.

Wade and James combined for six straight points before Ginobili made another 3, and Patty Mills added one to close the first-quarter scoring and give the Spurs a 26-20 advantage.

The Spurs committed nine turnovers while managing only 20 points in the third quarter, and Miami led 78-74 heading to the fourth.

Notes: James joined Michael Jordan and Kobe Bryant as the only players with 4,000 points and 1,000 assists in the postseason. … Ray Allen moved past Bryant and Derek Fisher into second place on the career list with 49 3-pointers in the NBA Finals. Robert Horry, a former Spurs forward, is the leader with 56.

CINCINNATI (AP) — The Reds lost a series and got another concern about their pitching staff. Left-hander Madison Bumgarner got... read more