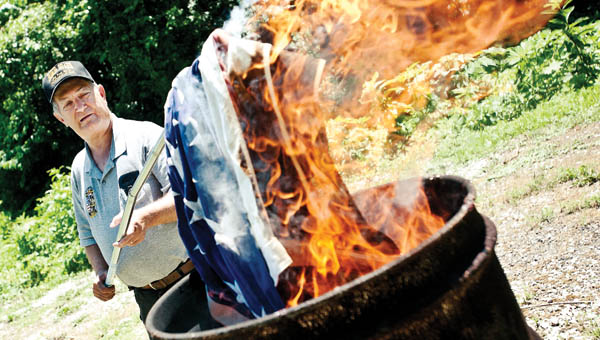 Warren Napier, Post Commander for VFW 6878 of Proctorville, participates in a flag-burning ceremony.

Several members of the post congregated at the Veterans Memorial Park in Proctorville to inspect and subsequently destroy collected flags that met the required guidelines for burning.

“A flag that is tattered or faded should not be flown,” Warren Napier, commander of VFW Post 6768 said. “We inspect them first to ensure they are in a condition that allows burning.”

Flags that do not meet criteria for burning, Napier said, are repaired and put back in use. Large flags, such as the one given to the Post by Kroger in Proctorville, are cut into pieces before being burnt.

Post 6768 Adjutant Officer John Weber said the flags are collected several ways, such as from Boy Scouts, post offices and other organizations.

“We get flags that are worn out and no longer presentable,” Weber said. “The American Flag is a living emblem that represents living people and should be respected.”

Weber spoke about the do’s and don’ts of flag etiquette and said after being burnt it is proper to bury the ashes.

“If I see one in bad shape I’ll ask them to let me take and get them a new one,” he said. “Most of the time they are happy to do it.”

A dozen residents of the 2100 block of South Sixth Street congregated at the regular meeting of Ironton City Council... read more