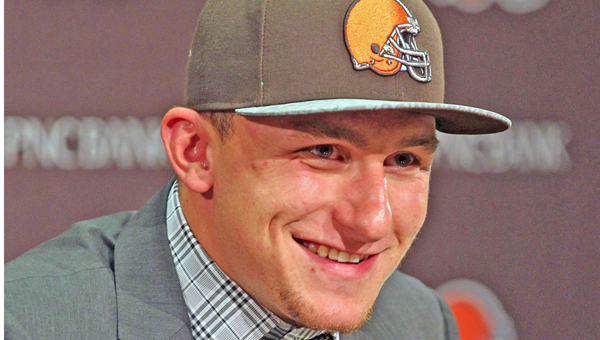 The Cleveland Browns signed first round draft pick Johnny Manziel on Tuesday. Terms of the deal were not disclosed. (MCT Direct Photo)

CLEVELAND (AP) — Johnny Football has some NFL money to rub between his fingers.

Johnny Manziel agreed to a contract with the Cleveland Browns on Tuesday, becoming the fourth of the team’s six draft picks to do so. Terms were not immediately available.

The former Heisman Trophy winner will enter training camp next month as Cleveland’s No. 2 quarterback behind veteran Brian Hoyer, who has been limited during offseason practices while recovering from offseason knee surgery

Browns coach Mike Pettine has stressed that Manziel has some catching up to do, but has made it clear that Hoyer’s lead was not “insurmountable.”

The Browns moved up in last month’s draft to select the popular and polarizing Manziel with the No. 22 overall pick. Manziel rubbed his fingers together when he walked onto the stage during the draft, his signature “money” gesture that has endeared him to some fans and annoyed others critical of his reputation for partying.

Manziel went 20-6 in two seasons at Texas A&M, where he became the first freshman to win the Heisman and earned the “Johnny Football” nickname for his dynamic playmaking abilities.

More recently, he has been in the spotlight for his leisure activities, particularly a weekend getaway in Las Vegas. The 21-year-old Manziel hung out poolside with New England Patriots tight end Rob Gronkowski, attended a UFC fight and sprayed champagne on patrons in a Vegas hot spot.

“If I want to go out and have some fun and it doesn’t hinder what my main goals in life are, then I really don’t care what anyone has to say,” Manziel said after a recent practice.

CLEVELAND (AP) — The Browns have released wide receiver Earl Bennett about a month after signing him to a free... read more