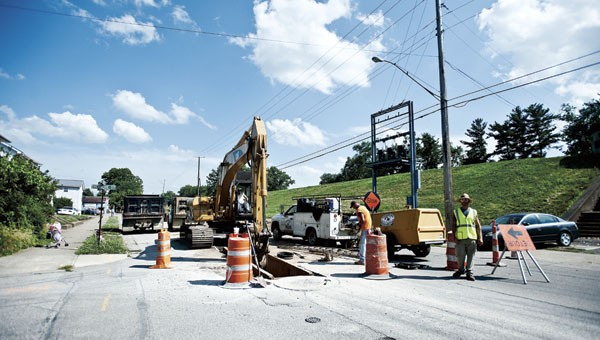 Environmental Protection Agency-mandated sanitary and storm sewer separation projects are happening in cities across the country. The City of Ironton adopted and implemented a storm water management plan Dec. 22, 2008, and it is ahead of schedule for its 2026 completion date.

“We are in compliance with the EPA’s order,” Ironton Mayor Rich Blankenship, said. “We get fined by the EPA if we fail to meet deadlines so it’s important to stay on schedule. The contract is for nine months, but all signs point toward finishing prior to that.”

Phase II — at a cost of $647,365 — is paid for through the city’s storm water utility fund, which the city residents pay into every month based on the amount of water used. The current phase must be completed by Dec. 31, 2015. The city has received one Ohio Public Works Commission grant of $300,000 for the entire 18-year project.

“We are about a year ahead of schedule,” Patrick Leighty, of city engineering firm E.L. Robinson, said. “The schedule of completion was agreed on at the same time the agreement was made for the court order. Construction for this phase wasn’t scheduled to begin until July 31.”

The North Ironton section was finished last year. With a complete project schedule to follow, the South Ironton/Mastin Avenue section was completed earlier this year. Phase II, from North Fifth and Elm streets to the city’s wastewater treatment plant and northeast toward U.S. 52, has begun.

“It’s a pretty large area land-wise,” Leighty said. “Although it’s the same size as the other areas there’s a lot more pavement and other things to contend with.”

The entire project is set for completion no later than 2026 and after two years of submitting progress reports every six months, in 2028 the city can apply for termination of contract.

Unfunded mandates from the EPA are something Blankenship says cause financial hardships.

“They mandate things,” he said, “but they don’t fund them. They give us deadlines and if we miss them, we get fined.

“We have engineers continuously working on our EPA compliance schedule. “The project is divided into sections.”

Rehabilitating manholes is also being performed under the mandate, which entails fixing cement and doing other necessary upgrades to minimize water infiltration.