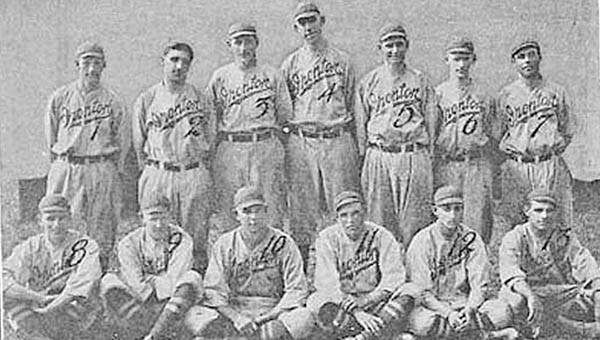 Football isn’t the only sport to have some professional history in Ironton.

While the Ironton Tanks ruled the semi-pro ranks from 1919 to 1930, minor league baseball preceded pro sports in Ironton beginning in 1912 with the Ironton Orphans.

The Orphans were replaced the nexgt season by the Nailers who Nailers were a minor league baseball team that played in the Mountain States League from 1911-1912 and the Ohio State League from 1913-1915.

Cornwell, Frost, McWhorter and Osborne were pitchers. The rest of the staff included Fred Trautman, Kearns and Feldner.

The catchers were Schwab and Jackley, Thompson and Schocky Taylor played first base, Albert McClintock was at second base, Long, Grieve and Cranley were at third base, Whalen and Frank Clouser at third base as well as J.E. Potter, and the outfielders were Kendall, Nally, Farrell, Jap Guhl and Madden.

Jackley, McWhorter, Kendall and Nally were all on the 1914 team.

Kentucky members were Lexington, Maysville, Newport and Paris. West Virginia entries were from Huntington and Charleston.

The Orphans also played in the Ohio State League.