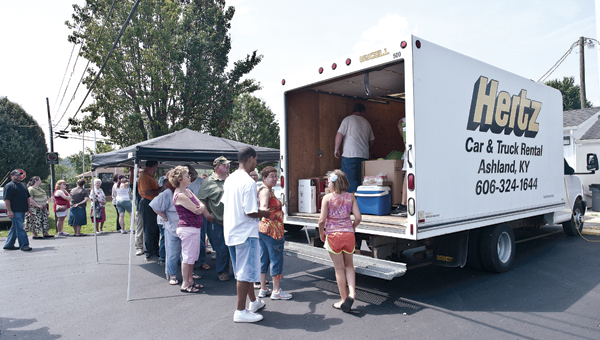 Burlington residents gather at the Burlington Commons Park during a food giveaway sponsored by the Concerned Citizens of the Burlington Area and the Ironton-Lawrence County Community Action Organization on Tuesday.

BURLINGTON — The Concerned Citizens of the Burlington Area are joining the Ironton-Lawrence County Community Action Organization to bring a bi-weekly farmers market to Burlington residents.

“We are going to have it every two weeks through June and July,” Ed Moellendick, president of the CCBA, said.

Tuesday’s market was the second for the Burlington area and the line of residents waiting to pick up fruit, vegetables and other food items was an improvement over the market’s first go around, Moellendick said.

“Two weeks ago turnout was low,” he said. “But, this time we did a good job of getting the word out through the CCBA website and we’ve had a fantastic turnout.”

Young families and the elderly who may be on fixed incomes or suffering from financial restraints are the target of the market but organizers are not concerned with knowing or disclosing the financial information of residents.

“We are targeting those young families and the elderly with this project,” Moellendick said. “But, when people sign up they aren’t being asked for any kind of financial statements or anything like that.”

Tuesday’s market expected to feed more than 100 families, which equates to around 1,000 pounds of food.

“People are coming in usually feeding families of four or five,” Keith Taylor, CAO culinary specialist, said. “For a five-person family we try and hand out about 50 pounds of food, or 10 pounds per person.”

The CAO also has markets in other locations in Lawrence County such as Ironton Middle School.

“We used to have one in Chesapeake, too,” Taylor said. “But, we just stopped that one because we weren’t getting anyone out to it. That’s what is good about this one here. It’s in a good, centralized location that allows people from pretty much all of Lawrence County to get to it easily.”

The CCBA and the CAO have also partnered to do a summer lunch program for children between the ages of 1-18. The program operates five days a week and feeds between 25-35 children a day.

“The summer program was something we thought was necessary because we found that a lot of kids only get to eat during lunch when school is in session,” Taylor said. “We make sure everything is done in accordance with USDA regulations.”